ANGOLA, DO YOU HEAR US chronicles the most important performance of 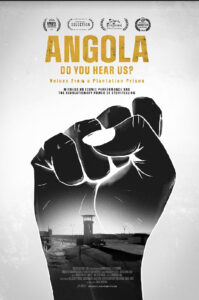 acclaimed Playwright Liza Jessie Peterson life: a 2020 appearance on the chapel stage of the

Louisiana State Penitentiary. The prison, with its 6,000 incarcerated men and 18,000 acres of farmland, is better known as Angola, after the homeland of the enslaved people who once labored on the site of the former plantation. Peterson’s journey there, to deliver her one-woman production of “The Peculiar Patriot,” begins many years earlier when she takes a job teaching poetry to incarcerated teenagers at Rikers Island. What begins as a way to pay bills between auditions becomes inspiration, as Peterson

strives to expose America’s modern-day plantation system, the prison-industrial complex that imprisons African-Americans for profit. The electrifying performance, speaking truth to power before a fired-up full house, is cut off prematurely when

authorities at the prison have heard enough. But the day ends in triumph, as the audience, and an entire prison watching remotely, joins Peterson with defiantly raised fists. Cinque Northern’s film, which utilizes his own original footage and animation, captures the performance and the transformational wake of its shutdown, as told by Peterson and the incarcerated people themselves – all despite the prison’s efforts to pretend nothing ever happened.

To find out more: cinquenorthern.com/apeculiarsilence

Watch at: paramountplus.com/movies/Angola: Do You Hear Us

About the filmmaker – Director Cinque Northern is an Emmy nominated, Peabody award-winning filmmaker and editor who’s passionate about the intersection of creative cinema, social impact and the empowerment of artists. He spent eighteen years as a documentary editor for film and television and has earned international recognition directing both narrative and documentary work. Recent works include The One and Only Dick Gregory (Showtime) for which Cinque was field director, story producer and editor. He also co-wrote and edited My Name is Pauli Murray (Amazon Studios) and directed Angola Do You Hear Us? (MTV Documentary Films) airing on Paramount+ in the fall. Cinque has an MFA in filmmaking from NYU Tisch School of the Arts and lives in Santa Barbara, CA.  For more go to: cinquenorthern.com