Anne hasn’t been the same since the jump. While skydiving for her 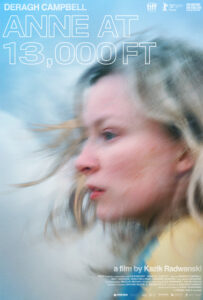 best friend Sara’s bachelorette party, the 27-year-old felt focused, free, above it all. Back on the ground, the pressures of her daily life threaten to overwhelm her. Her coworkers at the daycare center are constantly questioning the way she connects with the children. At Sara’s wedding, she meets a nice guy named Matt, but she can’t help bringing him into ever-more-awkward social situations. ANNE AT 13,000 FT chronicles the stressful circumstances that continue to mount as Anne prepares for

another jump. ANNE AT 13,000 FT pairs of two of the brightest young stars in cinema, director and writer Kazik Radwanski (Tower, How Heavy This Hammer) and rising talent Deragh Campbell (I Used to Be Darker). From the hurly-burly of the opening skydive to moments

of Anne’s frenetic tantrums, ANNE AT 13,000 FT reveals a director and star in search a woman of the brink. Director and writer Kazik Radwanski and actor Deragh Campbell join us for a conversation on their collaborative efforts to capture the shattering chaos of Anne’s daily life with an unflinching rawness, and how the piercingly honest dialog and tight camera evoke the work of John Cassavetes, Sean Baker and Harmony Korine.

For news and updates go to: cinemaguild.com/anneat13000ft

Performance by an Actress in a Leading Role (Deragh Campbell)

“A brief, bracing burst of microbudget indie filmmaking at its most powerful.”  – Jessica Kiang, Variety

“The spirit of John Cassavetes is alive and well in Radwanski’s approach, and Campbell delivers as a next-gen Gena Rowlands.” – Eric Kohn, IndieWire

“If there is justice in the Canadian film world… then Anne at 13,000 ft will be the film to launch both its director and star into the international  stratosphere.” – Barry Hertz, Globe and Mail

“Campbell’s performance and her ferociously committed turn as Anne is an astonishing feat. This is an emotionally charged and physically demanding performance fuelled by passion and rage.” – Pat Mullen, POV Magazine