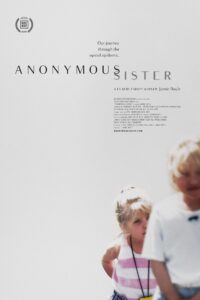 Emmy winner filmmaker Jamie Boyle turns the camera on her own family when her mother and sister become dependent on opioids. Drawing upon footage shot for over 30 years, Boyle creates a poignant and timely study of the deadliest man-made epidemic in United States history. ANONYMOUS SISTER is an eye-opening look at what it means to suffer, to survive, and to experience life in all of its pain and beauty. Featuring preeminent voices from Colorado’s state government, renowned healthcare organizations, community activist groups, and those

directly affected, this film in intended to kick off a  nationwide campaign to deepen the understanding of the opioid epidemic, reduce opioid prescribing, and strip away the harmful stigma associated with substance use disorder.

Director Jamie Boyle (Take a Vote, Jackson) joins us for a conversation on the enormous scope of opioid distribution, misinformation, fraud, legalized bribery, and lack of accountability regarding of Big Pharma, generally, and Purdue Pharmaceutical / Sackler family in particular bear responsibility for a scourge that has devastated millions of people’s lives and the impact addiction has had on her family.

For news, updates and screenings go to: anonymoussister.com

For help with opioid addiction go to: anonymoussister.com/resources

Director’s Statement – “The camera makes you forget you’re there. It gives you both a point of connection and a point of separation.”So begins Anonymous Sister––a visual memoir that chronicles a time in my life when a handheld Super 8 camera was the only thing that stood between me and the inconceivable reality on the other side of the lens, as I watched my loved ones succumb to an unknown, unnamed epidemic. ANONYMOUS SISTER is a recounting of what the opioid crisis looked like before it was labeled as such, when it entered your home under the guise of standard healthcare, when those to whom we entrust our lives became the greatest threat to it, when there was nothing left to do but bear witness. ANONYMOUS SISTER began as a teenage girl’s scream into the wind. I was drawn to the camera at a very young age, unaware that it would become my sole weapon against a tidal wave of misinformation disseminated by some of the most powerful and corrupt forces in the world. To document the life going out of someone is an excruciating thing. To do it when it is your mother’s life, your sister’s, may seem to be a form of self-torture. It certainly walks a tenuous line between preservation and destruction. What it did was offer me a way to look at something that I couldn’t otherwise. That camera would accompany me on my darkest days and suspend time, holding them alive and breathing for one more moment.A decade after her and my mom escaped the deadly, and horrifyingly common, toll of opioid addiction, my sister announced she was pregnant. It would be her first major interaction with the medical community since getting off opioids. This time, when I looked at life through a camera, what I saw was the unspeakable ramifications of human vice and corruption, staggering numbers of sisters and mothers gone, millions of lives irreparably altered, and sky-high rates of opioid prescribing. I saw a nation haunted by the ghosts of its needlessly dead, with no way to stop the destruction in the face of a system that consistently sacrifices lives at the altar of the almighty dollar. The end result speaks to the pull of escape, of refuge, and the various places we seek it––substances, money, work, family, art. It leaves us with unanswered, uncomfortable questions about what happens when those needs inevitably collide, when human life becomes a casualty of human greed. This film is our story. It belongs to all of us. Because when all is said and done, my family’s story is unique in only one respect—we lived to tell it.

About the filmmaker – Jamie Boyle is a two-time Emmy-winning documentary filmmaker living and working on the unceded Indigenous land of the Lenape peoples, also known as Brooklyn, NY. Her work has played at Sundance, SXSW, LA Film Fest, Full Frame, Hot Docs, True/False, DOC NYC, Human Rights Watch, and others. She was recently selected for the 2019 DOC NYC 40 Under 40 list. She was the editor, producer, and cinematographer for Jackson (SHOWTIME), winner of the 2018 News & Documentary Emmy for Outstanding Social Issue Documentary.  Jackson premiered at the LA Film Festival and was awarded Best Documentary at over fifteen festivals. She edited Trans in America: Texas Strong, winner of the 2019 News & Documentary Emmy for Outstanding Short Documentary. She was the Associate Editor and Production Manager on E­-TEAM (Netflix), which won the 2014 Sundance Film Festival Cinematography Award and was nominated for two News and Documentary Emmys, including Best Documentary. Most recently, she directed, filmed, and edited Take A Vote, a short documentary spotlighting the fight against voter suppression. She taught at the Bronx Documentary Center and as a guest lecturer at Columbia University.