ANVIL! THE STORY Of ANVIL follows Canadian heavy-metal band Anvil as they 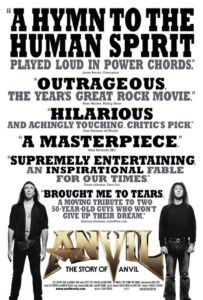 delivered a highly influential 1982 album Metal on Metal that would inspire the likes of Anthrax and Metallica, and then dropped off the map to begin what would become decades of toiling in obscurity. Director and former Anvil roadie Sacha Gervasi follows guitarist Steve “Lips” Kudlow and drummer Robb Reiner as they stumble through a harrowing European tour and reflect on failure, friendship, resilience and the will to follow even the most impossible of dreams. ANVIL! THE STORY OF ANVIL (2009) received widespread critical and public acclaim following its release by Abramorama and

features appearances by an array of heavy metal icons, including Metallica’s Lars Ulrich, Guns N’ Roses’ Slash, Motörhead’s Lemmy, Anthrax’s Scott Ian, and Slayer’s Tom Araya. The film is tied for 6th place as one of the highest rated documentaries of all time on Rotten Tomatoes with a 98% certified fresh 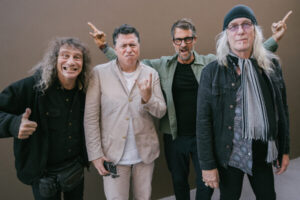 rating, and a 90% audience score with over 5000+ votes. It was named one of 2009’s best documentaries by the International Documentary Association, the Online Film Critics Society, and the National Society of Film Critics. It also made the year-end Top 10 lists in publications such as the New York Times, Washington Post, Newsweek, Village Voice, and many others. Director Sacha Gervasi (My Dinner with Herve, The Terminal, Hitchcock) joins us to talk about the unbelievable “making of” The Story of Anvil, as well as the remarkable journey his scrappy little film has been on for the last 13 years and all of the doors it has opened for him.

For updates and screenings go to: anvilthefilm.com

For VOD go to: anvilthefilm.com/watch-at-home

Utopia and Abramorama have partnered to release the remastered documentary,  ANVIL! THE STORY OF ANVIL alongside Portobello Electricfor a special one night engagement in 200 theaters nationally on September 27th with select extended theatrical runs through October at National Circuits including AMC and Regal Cinemas.

“A winning and surprisingly moving documentary about — wait for it — a struggling Canadian heavy metal band that apparently influenced a generation of hard-rockers including Metallica, Anthrax and Guns N’ Roses.” – Cary Darling, Dallas Morning News

“A study in the cost of pursuing a dream that’s probably the wrong dream, Anvil! The Story of Anvil looks for the high notes but doesn’t — or can’t — shy away from the lows.” – Tom Long, Detroit News

“The most stirring release of the year thus far.” – Anthony Lane, New Yorker

“The success of Anvil! The Story of Anvil lies in its ability to make you care about an enterprise you might initially have been inclined to laugh at.” – A.O. Scott, New York Times