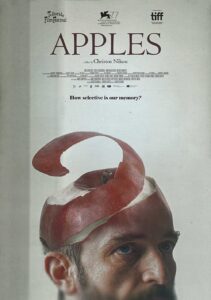 pandemic that causes sudden amnesia in growing numbers. A middle-aged man, Aris (Aris Servetalis), finds himself in a hospital and later in a recovery program designed to help “unclaimed” patients build new identities. Prescribed daily tasks on cassette tapes so he can create new memories and document them on

camera, Aris slides back into ordinary life, meeting Anna (Sofia Georgovasili), a woman who is also in recovery. Through images deadpan, strange and surreal, Greek writer-director Christos Nikou posits a beguiling reflection on memory, identity, and loss, exploring how a society might handle an irreversible epidemic through one man’s story of self-discovery. Are we the sum of the images we compile and display of ourselves, or are we something richer, and deeper?

For news and screenings go to: cohenmedia.net/apples

About the filmmaker – Christos Nikou was born in Athens in 1984. His short film KM participated in over 40 international film festivals, including Rotterdam, Stockholm, Palm Springs, Sydney, Tallinn Black Nights, Interfilm Berlin, and winning the Best Short Film Price at the Motovun Film Festival of Croatia. For the past ten years, he has worked as an assistant director on many feature films like DOGTOOTH (Yorgos Lanthimos) and BEFORE MIDNIGHT (Richard Linklater). APPLES is his first feature film.

“An offbeat treat that manages to embrace ironic distance and emotional weight through a prism of perfectly judged absurdism.” -Empire Magazine

“Crisp and flavorful, with a lingering aftertaste.” -The Hollywood Reporter

“Splendidly poignant and creepy.” -The Guardian