Released on the eve of the 50th anniversary of Earth Day and in the midst of the global Covid-19 pandemic, PLANET OF THE HUMANS takes a harsh look at how the 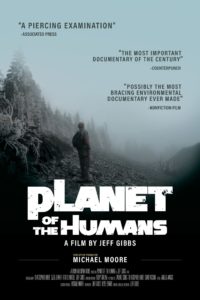 environmental movement has lost the battle through well-meaning but disastrous choices, including the belief that solar panels and windmills would save us, and by giving in to the corporate interests of Wall Street. PLANET OF THE HUMANS is the debut movie from director Jeff Gibbs, whom Executive Producer Michael Moore calls “a brave and brilliant filmmaker whose new voice must be heard.” Gibbs is a lifelong environmentalist and longtime collaborator of Moore’s with whom he co-produced Bowling for Columbine and Fahrenheit 9/11. Gibbs has dared to say what no one will — that “we are losing the battle to stop climate change because we are following environmental leaders, many of whom are well-intentioned, but who’ve sold out the green movement to wealthy interests and corporate America.” This film is the wake-up call to the reality which we are afraid to face: that in the midst of a human-caused extinction event, the so-called “environmental movement’s” answer is to push for techno-fixes and band-aids. Moore

and Gibbs decided that with the American public — and much of the world – confined to their homes and suddenly having to consider the role humans and their behavior have played in our fragile ecosystem, the moment was too urgent to wait until later this year for the film’s planned release. Director / Producer / Writer / Editor and Cinematographer Jeff Gibbs joins us for a free-wheeling conversation on the hard truths we all face and the dawning realization that we have allowed ourselves to be lulled into believing the billionaire class is going to ensure a sustainable collective future.

For news and updates go to: planetofthehumans.com

“This is perhaps the most urgent film we’ve shown in the 15 year history of our film festival” – Filmmaker Michael Moore, Founder, Traverse City Film Festival

“A delusion-shattering documentary on how the environmental and green energy movements have been taken over by capitalists.” – Frederic and Mary Ann Brussat, Spirituality and Practice

“A bleak picture of a near future that mankind’s very existence is irrevocably condemning.” – Simon Foster, Screen-Space

“From the warnings of the 1950s to the 21st-century corporate takeover of green energy, a grim look at humanity’s fate as the planet heats up. Is there any hope? This feels like only half the story.” – MaryAnn Johanson, Flick Filosopher