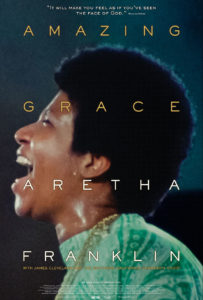 recording of Aretha Franklin’s album “Amazing Grace” at The New Bethel Baptist Church in Watts, Los Angeles in January 1972. Producer Alan Elliot joins us to talk about the “making of” and the resurrection of this remarkable display of raw talent and consuming passion, the 47-year long path that Amazing Grace has taken and how its arrival in theaters fulfills Aretha Franklin’s dying wish.

In 1972 Director Sydney Pollack (Tootsie, 3 Days of the Condor, Out of Africa) was inexperienced in shooting music documentary and shot without clapper boards snapping shut at the beginning of each take to help synchronize sound and picture in post-production. As a result of this mistake, even after months of work by experts, the 20 hours of footage couldn’t be synchronized with the audio tracks. The choir director from the Watts recordings was 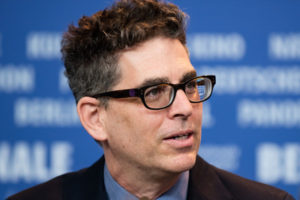 brought in to try to lip-read the reels, but after months of work, only about 150 minutes of footage had been matched with sound, none of it adding up to a complete, useable song. Deadlines passed as the “Amazing Grace” album came out in June 1972, selling millions with no synergy. In August, Warner Bros. officially wrote off and shelved the movie. Pollack never gave up on the project, but constantly had other commitments. In 2007, dying of cancer, Pollack finally handed the documentary project over to producer and music enthusiast Producer Alan Elliott.

For news and updates go to: amazing-grace-movie.com

CRITIC’S PICK: “Nonetheless, from a distance, this is obviously one of the great music films, less epic in scope than, say, “The Last Waltz” but as glorious in communal feeling and South Los Angeles zeal as “Wattstax” (the natural partner for a double feature) and as musically imaginative as “Stop Making Sense.” What distinguishes “Amazing Grace,” what lifts it to the penthouse, is a mix of energy and moment…You get both the most lovely gaze a professional camera’s ever laid upon Aretha Franklin and some of the mightiest singing she’s ever laid on you. The woman practically eulogizes herself. Don’t bother with tissues. Bring a towel.” – Wesley Morris, NEW YORK TIMES

“The two nights of filmed performances find Franklin-accompanied by the Reverend James Cleveland and the Southern California Community Choir-in spectacular voice and prolific imagination. Her rapturous power and intense concentration are revealed in long, urgent closeups that seem to reflect even the cinematographers’ awed astonishment. The film is a triumph of timeless artistry over transitory obstacles; its very existence is a secular miracle.” – Richard Brody, NEW YORKER

” … A captivating artifact, the rare making-of documentary that doesn’t just comment on but completely merges with its subject. The lift-you-to-the-rafters intensity of Franklin’s voice remains so pure and galvanic that “Amazing Grace” is one of the few movies you could watch with your eyes closed, though you would hardly want to.” – Justin Chang, Los Angeles Times