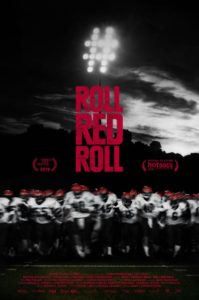 story that grabbed the national attention seven years ago. At a pre-season football party in small-town Steubenville, Ohio, a heinous crime took place: the assault of a teenage girl by members of the beloved high school football team. What transpired would garner national attention and result in the sentencing of two key offenders. But it was the disturbing social media evidence uncovered online by crime blogger Alex Goddard that provoked the most powerful questions about the case, and about the collusion of teen bystanders, teachers, parents and coaches to protect the assailants and

discredit the victim. As it painstakingly reconstructs the night of the crime and its aftermath, Roll Red Roll uncovers the engrained rape culture at the heart of the incident, acting as a cautionary tale about what can happen when teenage social media bullying runs rampant and adults look the other way. The film unflinchingly asks: “why didn’t anyone stop it?” Director Nancy Schwartzman joins us to talk about life in a town where high school football is king, a “boys will be boys” ethos that can easily morph into a rape culture and how a few brave women said no more.

For news and updates go to: rollredrollfilm.com

“Nancy Schwartzman’s devastating real-life thriller documents a shocking sexual assault in a tight-knit community, and the role of social media in compounding the felony but also helping to solve it” – Peter Howell, Toronto Star

“Documentaries don’t usually horrify the oxygen out of me, but I found myself gulping for air more than once during Roll Red Roll.” – Lena Wilson, Slate