AS FAR AS THEY CAN RUN takes us to rural to Pakistan, where families with 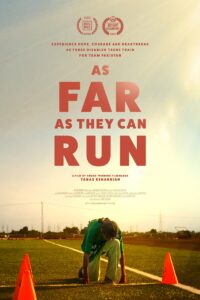 disabled children have few options. Some

desperate parents keep their children locked up or even chained. When athletic coaches from Karachi persuade the parents of three teenagers — Ghulam, Sana, Sajawal – to allow the kids to participate in a sports training program as part of a Special Olympics initiative, the families glimpse the hope that living with disability doesn’t have to mean that their children are “useless.” But they and the coaches must confront the question of what sports can—and cannot—change. Over a one-year

period, Iranian American filmmaker Tanaz Eshaghian follows three disabled children and their families as they grapple with shame and prejudice

in rural Pakistan to realize new talents and a sense of belonging through sports. Intimate and unflinching, hopeful and tragic, AS FAR AS THEY CAN RUN is a fascinating look at those who are struggling to find acceptance and worth in a society that had relegated them to the margins. Director Tanaz Eshaghian joins us for a conversation on all of the daunting challenges, physical, logistically and psychologically in shooting the children and their situation, as well as the joy of seeing the benefit the program has on their lives.

To watch: paramountplus.com/movies/As Far As They Can Run

About the filmmaker – Director / Producer / Writer Tanaz Eshaghian left Iran with her mother at the age of six. She grew up in New York City, went to Trinity School and graduated from Brown University in 1996 with a BA in Semiotics. Her first film “I Call Myself Persian,” completed in 2002, told the story of how Iranians living in the U.S. were affected by prejudice and xenophobia after the September 11 attacks. In Love Iranian-American Style, completed in 2006, she filmed her traditional Iranian family, both in New York and Los Angeles, California documenting their obsession with marrying her off and her own cultural ambivalence. For her début feature-length film Be Like Others, a provocative look at men in Iran choosing to undergo sex change surgery, she returned to Iran for the first time in twenty-five years. Be Like Others, a BBC 2, France 5, ITVS production, premiered at the 2008 Sundance film festival and went on to win the Teddy special jury prize at the Berlin Film Festival and was nominated for and Emmy award. In 2011, she completed “Love Crimes of Kabul” a documentary film inside a women’s prison in Kabul Afghanistan focusing on “moral crimes” for HBO. She was the Executive Producer of the award winning documentary about the mystery surrounding the Salvator Mundi painting “The Lost Leonardo” in 2021. Her films have also screened at the Museum of Modern Art and in the Walter Reade cinema at the Lincoln Center for the Performing Arts in New York City.