Mesmerizing in its imagery and shot in 51 locations across 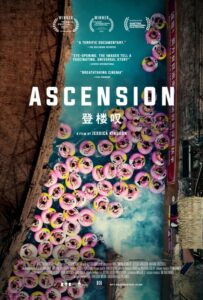 the country, ASCENSION is a cinematic exploration of China’s industrial supply chain that reveals the country’s growing class divide through staggering

observations of labor, consumerism and wealth. The film ascends through the levels of the capitalist structure: workers running factory production, the middle class selling to aspirational consumers, and the elites reveling in a new level of hedonistic enjoyment. In  traveling up the rungs of China’s social ladder, we see how each level

supports and makes possible the next while recognizing the contemporary ‘Chinese Dream’ remains an elusive fantasy for most. Producer Kira Simon-Kennedy and director / cinematographer / editor Jessica Kingdon joins us for a conversation on their collaboration and how a century old poem written by her Great Grandfather, Zheng Ze inspired her to make her illuminating and disquieting film about the massive degree of industrialization taking place in the world’s most populace country.

For news and updates go to: ascensiondocumentary.com

MTV Documentary Films and XTR present the theatrical release of ASCENSION opening on LA October 8th at the Laemmle Monica and Laemmle Playhouse in Pasadena.

About the filmmaker – New York-based Jessica Kingdon is a Chinese-American director/producer named one of “25 New Faces of Independent Film” by Filmmaker Magazine and selected for the 2020 DOC NYC “40 Under 40” list. Her award-winning short COMMODITY CITY (2017) is an observational documentary about the world’s largest wholesale mall in Yiwu, China. It was shortlisted for a Cinema Eye Honor and has played at over 50 film festivals including Rotterdam, True/False and Sheffield. She co-directed the short IT’S COMING! (2020), which was supported by Rooftop Films, and is currently playing festivals, and ROUTINE ISLAND (2019), which is included in The Eyeslicer Season 2. Jessica’s producer credits include Tania Cypriano’s BORN TO BE (NYFF 2019), Ian Bell’s 808: HOW WE RESPOND (Sheffield 2019), Nathan Truesdell’s THE WATER SLIDE (True/False 2018), and Johnny Ma’s OLD STONE (Berlinale 2016). She is a member of the Brooklyn Filmmakers Collective.

About the filmmaker – Kira Simon-Kennedy – Producer, of Jessica Kingdon’s first feature documentary about the changing nature of production, consumption, labor, leisure, and aspiration in the People’s Republic of China. premiering at Tribeca. Co-founder & co-director of China Residencies, A multi-faceted arts nonprofit founded in 2013 to foster sustainable creative exchange between mainland China, Hong Kong, and the rest of the world. China Residencies publishes an online directory of opportunities, funds excellent creative people and projects, and nurtures the next generation of organizers and administrators, And co-founder of Rivet, a unified search platform for creative opportunities worldwide, created in collaboration with Katrina Neuman & Sebastien Sanz de Santamaria.

“Like its documentary predecessors, Ascension finds aesthetic allure and fodder for debate in the complex symphony of industrialism and the people functioning within its order and disorder.” -The Hollywood Reporter

“The chance to glimpse behind the curtain of an unfamiliar China is just one of the attractions of a thoughtful, eye-opening film…” – Screen International

“In humanizing Chinese people and bringing light to the most pressing issues facing Chinese society, Kingdon has also drawn a connection between the American experience and the Chinese one.” – Noah Schwartz, Film Threat

“It’s a documentary that’s more than just a compilation of ‘slice of life’ footage, because the movie is presented as a mosaic of a culture … It’s up to viewers to look at all the different segments that are presented and see what the big picture is.” – Carla Hay, Culture Mix