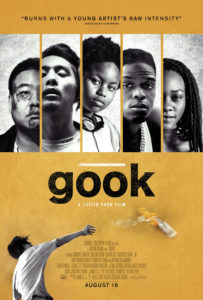 In Justin Chon’s feature film GOOK is a dramedy about Eli and Daniel, two Korean American brothers, who own a struggling shoe store and their unique and unlikely friendship with Kamilla, an 11-year old African American girl. The film opens with Eli scoring a stash of fresh sneakers as his golden ticket to get out of debt and fix his biggest problem: keeping his dad’s shoe store open. Against her brother Keith’s warnings, Kamilla ditches school again to help out at the shoe store, her mother’s former workplace. Everything is going as planned until Kamilla accidentally reveals a gifted pair of expensive sneakers to Keith. Keith realizes Kamilla has been going to the shoe store. Out of anger towards Eli and Daniel he uses this opportunity as revenge and plans to steal all the shoes. Eli must make the ultimate decision for the future of the store and the people he loves. With the chaos of the LA Riots moving towards them, the trio are forced to defend their store against Keith while contemplating the future of their own personal dreams and the true meaning of family. Director, Writer and Executive Producer Justin Chon joins us for a conversation on his powerful, soul searching film about race, friendship, and family.

For news and updates go to: samuelgoldwynfilms.com/gook

“Chon’s drama is uneven but bristling with life, and it offers a new perspective on a calamitous moment, one whose 25th anniversary has been commemorated in recent months with a slew of potent documentaries.” – Sheri Linden, Los Angeles Times

“Director, writer and actor Justin Chon remembers the 1992 LA Riots with a rare Korean-American perspective in “Gook,” which reveals itself as a poignant picture of race and friendship.” – Kyle Kohner, The Playlist

“Nodding to Spike Lee’s Do the Right Thing and Kevin Smith’s Clerks, this sophomore feature exemplifies the grunge and angst-ridden energy of the 90s, with a humorous streak as frank as its racially charged title.” – Leah Pickett, Chicago Reader

“Gook may not come close to the electric greatness of Lee’s 1989 film but, as a gesture in its direction, it’s alive with biting promise.” – Alison Wilmore, BuzzFeed