AULCIE is the incredible story of Aulcie Perry, an African American basketball 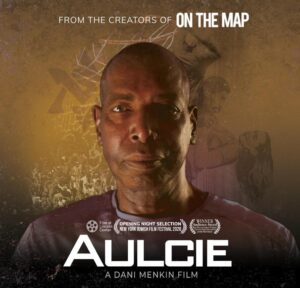 player who hailed from the violence-filled streets of the 1960s Newark, New Jersy. During the summer of 1976, Aulcie Perry was spotted by a scout for Maccabi Tel Aviv while playing at the Rucker courts in Harlem and was quickly signed to play for their fledgling team. The Israeli players immediately responded to Aulcie’s leadership and that year they had what one Sports Illustrated writer described as “the most extraordinary season in its remarkable history” and what Perry later called “the best nine months of my life.” He became an overnight sensation in Israel, beloved by

the fans and by his adopted country. He converted to Judaism and became an Israeli citizen. His highly publicized relationship with Israeli supermodel Tami Ben Ami became the subject of relentless media attention, making him one of Israel’s biggest stars. But his success wasn’t enough to save him from the descent into drugs and jail time, before finally finding redemption. Director Dani Menken (On the Map, Dolphin Boy, 39 Pounds of Trouble) joins us for a conversation on the remarkable and complicated tale of a legendary athlete.

For news and updates go to: heyjudeproductions.com

AULCIE will open at Laemmle Theaters in Los Angeles on November 12 in at JCC Manhattan in New York City on November 16, and will be available virtually as of November 19th.

About the filmmaker – Currently living in Los Angeles, California, Dani Menkin is the twice Israeli-Academy-Award-Winning filmmaker of 39 POUNDS OF LOVE  and IS THAT YOU? 39 POUNDS OF LOVE was sold to HBO Documentary Films and shortlisted for the American Oscar Awards.  Menkin’s award-winning film DOLPHIN BOY (co-directed with Yonatan Nir) was sold to over 20 countries around the globe and was bought by Walt Disney Pictures for adaptation. His documentary ON THE MAP  is being distributed by Lionsgate in North America.

“The compact, cross-cultural documentary “Aulcie” is as open-hearted and quietly engaging as its title character…” – Gary Goldstein, Los Angeles Times