Director and son, David Siev leaves his apartment in New York City to head back 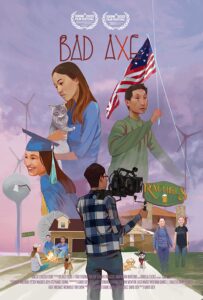 to his rural hometown of Bad Axe, Michigan. His arrival comes at a time when the devastating impact of the COVID-19 pandemic is making itself felt across much of the Mid-West. In this insightful and intimate documentary, BAD AXE, Asian-American filmmaker, David Siev, documents his family’s struggles to keep their restaurant open just as racialized fears surrounding the virus grow and deep generational scars dating back to his parent’s history in the Cambodian Killing Fields are unearth between the family’s patriarch, Chun, and his daughter, Jaclyn surface. When the BLM movement takes center stage in America, the family uses their voice to speak out in their town where Trumpism runs deep. What unfolds is a real-time portrait of 2020 through the lens of

this multicultural family’s fight to keep their American dream alive in the face of a pandemic, Neo-Nazis, the trauma of having survived a genocide and generational scars from the Khmer Rouge era that ravaged Cambodia. Director and subject David Siev joins us to talk about his family’s resolve in the face of physical threats, balancing privacy with the importance of telling a story that ultimately reveals universal truths about the state of political discourse and community in a post-Trump world.

For updates and news go to: facebook.com/badaxefilm

About the filmmaker – David Siev – Director /Producer/ Cinematographer – After graduating from the University of Michigan, David Siev left his small Midwest town of Bad Axe, MI for Los Angeles. He landed a home at Jeff Tremaine’s production company, Gorilla Flicks, where he spent several years finessing the art of guerrilla filmmaking. As a jack of all trades filmmaker, David holds producing, camera, and consulting credits on everything from hidden-camera blockbuster comedies like BAD TRIP (Netflix) to rock and roll biopics such as THE DIRT (Netflix). David first made waves in the Asian-American festival circuit with the debut of his award-winning short film, YEAR ZERO. The film would go on to win Best Narrative Short awards from the DC Asian Pacific American Film Festival, Vancouver Asian Film Festival, Manhattan International Film Festival, and several others. David currently lives in New York where he is now focused on writing and directing his own projects.

“While the documentary refrains from giving family members clear direction on how to mitigate their fears and anxieties, they have each other. That familial strength is what injects this poignant documentary with so much optimism.” – Andrew Stover, Film Threat

“A deeply personal film that feels essential when we tell the story of how 2020 shaped this country.” – Brian Tallerico, RogerEbert.com

“With as much as Bad Axe presents, it’s not offering solutions, and that’s fine. It’s asking a lot for a director’s feature debut to find answers for things like PTSD, systemic racism, pandemics, and political strife.” – Christopher Llewellyn Reed, Hammer to Nail

“If you’ve made any missteps when it comes to how you changed your life… you’ll be able to see a lot of the messy artistic truth in Bad Axe — and it’s even easier to find emotional resonance in this family saga.” – Dan Fienberg Hollywood Reporter

“With as much as Bad Axe presents, it’s not offering solutions, and that’s fine. It’s asking a lot for a director’s feature debut to find answers for things like PTSD, systemic racism, pandemics, and political strife.” – Therese Lacson, Collider