Angel Ellis is just trying to do her job. She’s a reporter for Mvskoke Media in 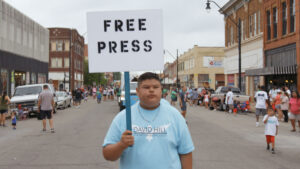 Okmulgee, Oklahoma, and she wants to give her readers access to all the information relevant to the Muscogee (Creek) Nation. But that’s not an easy task, given that Angel and

her colleagues believe in truth and transparency and aren’t afraid to challenge the integrity of some questionable tribal officials. Fast-forward to a confusing whirlwind of an emergency session at the National Council, where the 2015 Free Press Act is repealed, Mvskoke  Media’s independent editorial board is dissolved, and the newspaper is placed under the direction of the Secretary

of the Nation and Commerce.

Now the real fight begins. Co-directors Rebecca Landsberry-Baker and Joe Peeler tell a nuanced, empowering tale of a modern Native community fighting for transparency and access to information in order to hold their government accountable. Bad Press is an energizing watch — full of humor, humanity, and numerous twists and turns.

About the filmmaker – Rebecca Landsberry-Baker is a Sundance Institute Documentary Film Program grantee, Ford Foundation JustFilms grantee, and 2022 NBC Original Voices fellow. She is an enrolled citizen of the Muscogee Nation and the executive director of the Native American Journalists Association.  Landsberry-Baker was a recipient of the National Center for American Indian Enterprise Development’s Native American 40 Under 40 award in 2018.