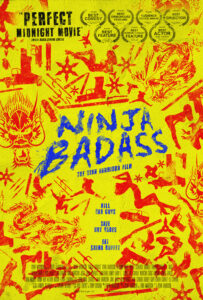 fevered, gonzo journey into the gorified world of the NINJA BADASS. The Ninja VIP Super Club is doing a slow drag across the American Midwest, culminating in female sacrifice. When they kidnap a super hot babe that local scumbag, Rex, has his eyes on – it’s up to him to become a ninja and steal her back! From exploding cows to bazooka cops, hillbilly senseis, even more super hot babes, deadly flying feet, badass ball rippers and an over-the-top ninja villain in

cowboy boots with an appetite for everything that’s soft and fuzzy – along with the original song “I’m a Ninja Now” from Vince Johnson, the singer-songwriter behind Joe Exotic’s viral songs such as “I Saw a Tiger” — this outrageous

twist on ‘80s B-ninja flicks is a singular, out-of-body experience moviegoers won’t soon forget!  Director / writer / producer / editor / Ryan Harrison joins us for a wide-ranging conversation on what inspired this raucously funny story, the challenge of holding together his Ninja dream project over a five year time-span and how his background as a special effects artist impacted the project.

For updates and screenings go to: whitetrashninja.com

About the filmmaker – Ryan Harrison likes bacon and boobies. He’s originally from Indianapolis, IN. NINJA BADASS is his feature debut. He’s really visionary – probably the most visionary ninja movie director of all time. His movie career began with VFX – working on Kerry Prior’s THE REVENANT, Don Coscarelli’s JOHN DIES AT THE END and a Vietnamese TV show made in a nondescript warehouse in South El Monte. He currently works in the movie trailer business as a creative director at Tiny Hero in Burbank, CA while he attempts to figure out what the fuck is gonna happen in NINJA BADASS 2. His favorite ninja movies are NINJA BADASS, NINJA TERMINATOR, and NINJA THUNDERBOLT.

“If Napoleon Dynamite was a ninja…” – Victims and Villains