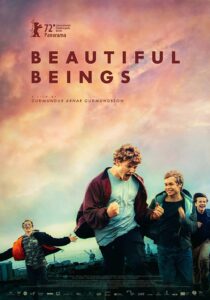 into the tumultuous life of Addi, a boy raised by a clairvoyant mother, decides to adopt a bullied misfit into his gang of outsiders. Left to their own devices, the boys explore aggression and violence but also learn about loyalty and love. As their behavior escalates towards life–threatening situations, Addi begins to experience a series of dreamlike visions. Can his newfound intuition guide him and his friends back to a safer path, or will they dive irrevocably into further

and went on to receive over 50 international awards. Director and writer Guðmundur Arnar Guðmundsson joins us for a conversation on his creative inspirations and personal recollections that brought him to tell a story about friendship, the importance of role models, self-acceptance and intuition.

For more go to: alteredinnocence.net/beautifulbeings

About the filmmaker – Guðmundur Arnar Gudmundsson graduated in Fine Art and studied screenwriting. His short films and feature debut have been showcased and awarded in numerous festivals. Among these accolades are Cannes Film Festival, Venice Film Festival and a nomination for the European Film Awards. His debut feature Heartstone premiered in the Venice Days Competition in 2016 and ended up collecting over 50 awards worldwide.

“Beautiful Beings goes to very dark places, including depicting sexual abuse. But it leaves us with a glimmer of hope for these kids who may not have much going for them, but do have each other.” – Anna Smith, Deadline Hollywood Daily

“Confronts the feral cruelty and violence of children on the cusp of adulthood, but finds also a tenderness amid the sharp edges and posturing.” – Wendy Ide, Screen International

“If in terms of narrative there’s not much new here, there is a freshness and an inhabited vibrancy that makes this painful coming of age story feel exactly its own.” – Jessica Kiang, Variety