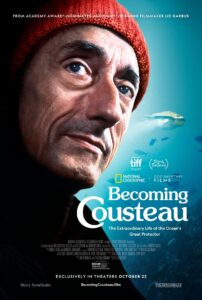 and his explorations under the ocean became synonymous with a love of science and the natural world. As he learned to protect the  environment, he brought the whole world with him, sounding alarms more than 50 years ago about the warming seas and our planet’s vulnerability. In BECOMING COUSTEAU, from National Geographic Documentary Films, two-time Academy Award®-nominated filmmaker LIZ

GARBUS takes an inside look at Cousteau and  his life, his iconic films and inventions, and the experiences that made him the 20th century’s most unique and renowned environmental voice — and the man who inspired generations to protect the Earth. Director Liz Garbus (What Happened, Miss Simone?, All In: The Fight for Democracy, The Farm: Angola, USA) joins us for a look back at one of the 20th centuries most influential and consequential figures and one of the early advocates for preserving and protecting mother ocean.

For news go to: nationalgeographic.com/becoming-cousteau

For more go to: storysyndicate.com

About the filmmaker – Liz Garbus is a two-time Academy Award® nominee (“The Farm: Angola, USA,” “What Happened, Miss Simone?”), two-time Emmy® winner (Directing, Drama Series, and Directing, Nonfiction Programming), Peabody winner (“A Dangerous Son”), GRAMMY® nominee (“What Happened, Miss Simone?”), DGA nominee (“What Happened, Miss Simone?”) and BAFTA-nominated (“Reporting Trump’s First Year: The Fourth Estate”), Garbus is one of America’s most celebrated filmmakers, renowned for her documentary work and also for her breakthrough scripted debut. Her work has been featured in film festivals from Sundance to Telluride to Toronto to the New York Film festival and has appeared in theaters and across streaming platforms, as well as premium cable television. Other credits include “The Innocence Files” (Netflix, 2020), “Who Killed Garrett Phillips?” (HBO, 2019), “There’s Something Wrong with Aunt Diane” (HBO, 2011), “The Farm: Angola, USA” (Academy Award nominee, 1998) and many others. Her narrative feature debut, “Lost Girls,” premiered at Sundance Film Festival in 2020 and was released on Netflix and in theaters in March 2020. Her series “I’ll Be Gone in the Dark” premiered on HBO in June 2020. Garbus’ recent film “All In: The Fight for Democracy” premiered at the New York Film Festival, Telluride Film Festival, drive-in screenings, theaters and digitally on Amazon Prime Video in September 2020. For more go to storysyndicate.com

“Absorbing, compelling and often surprising… This is a tale free of talking heads and commentators looking back at events they only half-remember and [director Liz] Garbus’ portrait is all the more effective and impactful as a result of that.” – James Croot, Stuff.co.nz

“Liz Garbus’s focused, comprehensive documentary pays tribute to Cousteau’s legacy as an explorer, inventor and filmmaker, but also charts his evolution into a passionate advocate for the environment.” – Allan Hunter, Screen International

“A film that serves both as a tribute to an icon and a powerful warning on the devastation of our planet.” – Ricardo Gallegos, But Why Tho? A Geek Community