BIX: “Ain’t None of Them Play like Him Yet” chronicles the life and music of 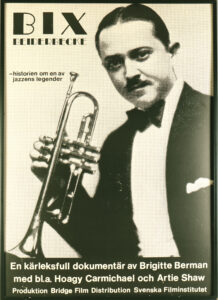 cornetist / pianist / composer Leon “Bix” Beiderbecke, regarded by many as jazz’s man who got away. Born 1903 in Davenport, Iowa into an upper middle-class family, Beiderbecke became a legend even in his short lifetime, bringing an amazing new energy and unprecedented maturity to the music and influencing generations of musicians. After years of battling alcoholism, Bix died in Sunnyside, Queens on August 6, 1931. The cause of death was given as lobar pneumonia. He was 28. Using archival photographs and rare footage (including the three sole momentary fragments capturing Bix on film) and interviews with friends and colleagues (including jazz greats Hoagy Carmichael, Doc Cheatham, Artie

Shaw, et al.), Berman’s acclaimed documentary paints a vivid portrait of a vanished era and brings to life the only trumpeter Louis Armstrong regarded as an equal (the quotation in the film’s title was once spoken by Armstrong). Long cherished by aficionados as the greatest film 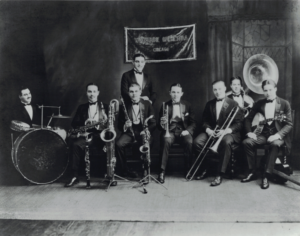 ever made about a jazz musician, BIX has also been one of the most difficult to see, with few theatrical screenings, a fleeting home video release and never available via streaming. Academy Award winning director Brigitte Berman (Artie Shaw: Time is All You Got, River of My Dreams) joins us to talk about the blazing comet of a musician who was fundamental to the development of America’s most vital musical genre, jazz, as well as the impact his playing had on those who played with him and those who heard him.

A new restoration of the long-unseen documentary BIX: “AIN’T NONE OF THEM PLAY LIKE HIM YET” (1981), Canadian filmmaker Brigitte Berman’s vivid portrait of the legendary jazz musician Leon “Bix” Beiderbecke, will have its world premiere at Film Forum on Friday, August 6, the 90th anniversary of Beiderbecke’s death.

About the filmmaker – Brigitte Berman is an Academy Award®-winning Canadian producer, director, writer and editor who was born in Frankfurt, Germany. Her work in the film and television industry encompasses more than thirty-five years. She has produced and directed over two hundred documentaries, dramatic features and movies made for TV, both independently and at the Canadian Broadcasting Corporation. In 1989 she left the CBC to strike out on her own. Her filmography includes the award-winning BIX: “ain’t none of them play like him yet”, the Academy Award®-winning ‘ARTIE SHAW: Time Is All You’ve Got’ and The Circle Game. She is currently in pre-production on her next feature documentary.

“What makes it extraordinary is the story it tells of an uncanny musician and his beautiful playing and songs.” – Glenn Kenny, New York Times

“An excellently filmed version of a musical legend, with the added impact of a tragedy…it is not a tale of self-destruction but of an innocent figure, fantastically gifted with everything but worldly wisdom.” – Variety

“A masterful job of evoking the 1920s Zeitgeist with a superb soundtrack.” – Leonard Feather (jazz musician and historian)

“Berman captures Bix fully… In the end, BIX is about the artist – any artist with a talent he can’t contain or fully express. There’s thus an audience far beyond those of us in the Bix brigade.” – Charles Champlin, Los Angeles Times