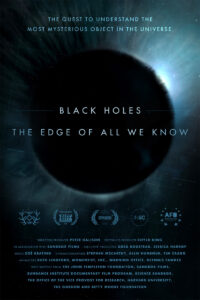 documentary, Black Hole: The Edge of We Know poses and answers an intriguing question, What can black holes teach us about the boundaries of knowledge? These holes in spacetime are the darkest objects and the brightest—the simplest and the most complex. With unprecedented access, Black Hole: The Edge of All We Know follows two powerhouse collaborations. Stephen Hawking anchors one, striving to show that black holes do not annihilate the past. Another group, working in the world’s highest-altitude observatories, creates an earth-sized telescope to capture the

first-ever image of a black hole. Interwoven with other dimensions of exploring black holes, these stories bring us to the pinnacle of humanity’s quest to understand the universe. Director Peter Galison (Secrecy) joins us to talk about the world-wide effort of scientists, mathematicians, engineers, students, teachers and physicists to reach new heights of understanding our universe and the opportunity to showcase the more personal and life-affirming side of the late physicist and deep-thinker Stephen Hawking.

For news, updates and screenings go to blackholefilm.com

Director’s Statement – “I began filming Black Holes | The Edge of All We Know in the spring of 2016, when five colleagues and I launched the Black Hole Initiative, an interdisciplinary center for the study of black holes. Unlike the many fascinating objects in the sky, black holes have come to be central not only to astronomy, but also to mathematics, physics, and philosophy—not to speak of the way they figure in science fiction, in the art world, and in everyday speech. Two of those co-founders (both key figures in the film) are Sheperd Doeleman, the first director of the Event Horizon Telescope (EHT), and Andy Strominger, a long-time collaborator with Stephen Hawking. By April 2016, I had begun working as a physicist/philosopher with the EHT— Alongside the scientific work, during the following years, I filmed what became the first of the three strands of Edge: the EHT’s struggle to make the first image of a black hole. The resulting image was released on 10 April 2019 and seen in the following forty-eight hours by several billion people: the most-viewed scientific image in history. Also from 2016-19, I filmed a parallel effort by Hawking and colleagues, as they undertook to make sense of the (theoretical) threat that black holes pose to the very idea of universal physical law. Finally, philosophers reflect on these most mysterious objects: Is knowledge of the interior of a black hole even to be counted as real? Edge weaves these strands (observation, theory, and philosophy) together, all around the theme of what it is possible to know of these darkest, most elusive and mysterious edges of space and time. The goal of the film is not just to popularize already-achieved science results—it is to bring the audience into the all-too human conduct of science, the dynamics of collaboration, the challenges of observing and theorizing, the tantalizing clues to space and time that can be garnered in the making of science at the absolute forefront of what we can understand.” – Peter Galison

About the filmmaker – Peter Galison is a physicist/historian of science/filmmaker at Harvard University. In 1997, he was named a MacArthur Fellow; with his Event Horizon Telescope colleagues, Galison shared in the 2020 Breakthrough Prize in Fundamental Physics for the first image of a black hole. He is a co-founder of the Black Hole Initiative at Harvard, an interdisciplinary center for the study of these most extreme objects. His documentary film (with Pamela Hogan, 2000) probed the moral-political debates over the H-bomb: Ultimate Weapon: The H-bomb Dilemma. He and Robb Moss co-directed Secrecy (2008), on national security secrecy, which premiered at Sundance. The two also co-directed Containment (2015), about the need to guard radioactive materials and warn the 10,000-year future. Galison partnered (as dramaturg) with South African artist William Kentridge on a multi-screen installation, The Refusal of Time (2012) and an associated chamber opera. He is also the author of several books, including Image and Logic; Objectivity; (with L. Daston), and Einstein’s Clocks, Poincaré’s Maps.

“Peter Galison’s film does a superb job of conveying the life of science – the passion, the wonder, and the comradery forged by a group of people working together to fathom this strange cosmos we live in” – Alan Lightman, writer/physicist, MIT

“…explores the many meanings of black holes and that pioneering photo… a symbol of what humanity is capable of when it aims high and works together.” – space.com

“The experience is akin to that of watching a great artist at work … just a healthy respect and an opportunity to forge a human connection.”- Eye for Film