In the shadows of the bright lights of Las Vegas, its last call for a beloved 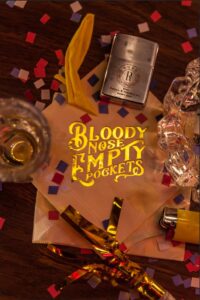 dive bar known as the Roaring 20s. That’s the premise, at least; the reality is as unreal as the world the regulars are escaping from. BLOODY NOSE, EMPTY POCKETS is a mosaic of disparate lives, teetering between dignity and debauchery, reckoning with the past as they face an uncertain future, and singing as their ship goes down. Filmmaking duo Bill and Turner Ross return with an elegiac portrait of a tiny world fading away but still warm and beating with the comfort of community. Their beguiling approach to nonfiction storytelling makes for a

foggy memory of experience lost in empty shot glasses and puffs of smoke. Bill Ross IV and Turner Ross (45365, Tchoupitoulas, Western, Contemporary Color) join us for a lively conversation on the fiction and non-fiction filmmaking expectations, the logistical and post-production challenges of making this film and the cinematic inspirations that inform Bloody Nose, Empty Pockets.

For news and updates go to: departmentofmotionpictures.com

About the filmmakers: Bill Ross IV and Turner Ross are an American filmmaking team whose credits include the award-winning films 45365 (2009), TCHOUPITOULAS (2012), WESTERN (2015), and CONTEMPORARY COLOR (2017). Born and raised in Sidney, Ohio, and both graduates of the Savannah College of Art and Design, Bill and Turner Ross began work in the film industry in Los Angeles, with Bill as an editor and filmmaking teacher, and Turner in art departments on studio features. But they soon decided to eschew the day jobs of Hollywood and continue the creative partnership they began as kids by making their own films. In the years since, their films have brought them renown as some of the most innovative and interesting documentary filmmakers working today, with a style all their own and always evolving — pushing the art of presenting uninhibited portraits of and journeys through places, with all the complicated, humanistic, and lyrical truth that that entails. Their work has been supported by the Sundance Institute, the Rooftop Filmmaker’s Fund, Cinereach, the San Francisco Film Society and a generous grant from the late Roger Ebert. They were honored as Ambassadors for the American Film Showcase and as Sundance Documentary Institute Fellows. They were named Decade Filmmakers by Cinema Eye Honors, and in 2018 they became members of the Academy of Motion Pictures Arts & Sciences. When not making their own films, they collaborate with friends and fellow filmmakers such as Benh Zeitlin (BEASTS OF THE SOUTHERN WILD, WENDY), David Lowery (AIN’T THEM BODIES SAINTS, A GHOST STORY), A.J. Schnack (CAUCUS), Robert Greene (BISBEE ’17), Raoul Peck (I AM NOT YOUR NEGRO), and David Byrne. They live and work in New Orleans. According to Metacritic, Bill and Turner Ross are the 6th best reviewed filmmakers of the 21st century. For more go to: rossbros.net

‘”Bloody Nose, Empty Pockets” may not be the straight-faced documentary it looks like, but it’s a sober-eyed document of our times nonetheless.’ (A-) – Eric Kohn, indieWire

“…a tragic piece about the homes away from home that provide comfort, as well as just how fleeting that comfort can feel in the bright light of day.” (A-) – Chris Barsanti, The Playlist

“Reaches for something just as truthful as either pure doc or pure fiction, finding a hybrid place in the middle that makes it no less powerful.” – Brian Tallerico, RogerEbert.com