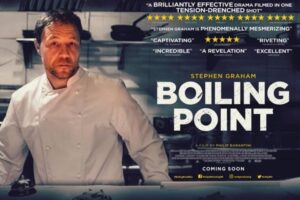 into the internal dynamics roiling thru one of the hottest restaurants in London on the busiest night of the year. A charismatic, commanding head chef Andy Jones (Stephen Graham) balances along a knife’s edge as multiple personal and professional crises threaten to destroy everything he’s worked for. A surprise visit from a health and safety inspector sets the staff on edge as the overbooked hotspot begins to fill with guests. Jones alternately berates and cajoles his diverse staff, trying his best

to diffuse tensions between management and his crew, while catering to the ridiculous demands of customers. Co-written with James Cummings (A Place for Everything), Along with Stephen Graham, BOILING POINT, stars, Vinette Robinson, Alice Feetham, Hannah Walters, Malachi Kirby,

For news and updates go to: ascendantfilms.co.uk/films/boiling-point

About the filmmaker – After 20 years of performing in front of the camera – including roles in the massively successful BAND OF BROTHERS, CHERNOBYL, NED KELLY and HUMANS, to name a few – Philip Barantini transitioned into directing in the late 2010s, marking his first short film with the award-winning SECONDS OUT, written by and starring Robbie O’Neill. Following this, Barantini helmed the BIFA nominated short film BOILING POINT, starring Stephen Graham, which was then adapted into the hotly anticipated one-shot feature of the same name in 2021; both movies were co-written with Barantini’s frequent collaborator James Cummings. “BOILING POINT” saw its international debut in competition at the Karlovy Vary International Film Festival, and will premiere in the UK at the BFI London Film Festival in October 2021. Barantini is due to helm 21 LAPS ENTERTAINMENT’S THE LAST DROP, with Sharon Horgan attached. Barantini’s other directing credits include feature film VILLAIN starring Craig Fairbrass and his TV debut, BBC’s THE RESPONDER starring Martin Freeman, directing the last episode of the season, which is due for release early 2022. For more: threelittlebirdspictures.co.uk

“An exhilarating workplace drama that’s like jumping into a speeding sports car, one inexorably headed for a brick wall. But what a ride it is until it makes its final curve.” – Gary Goldstein, Los Angeles Times

“As unlikely as it seems, a night inside an imploding restaurant creates one of the most satisfying and compelling dramas of the year.” – Brian Orndorf, Blu-ray.com

“Boiling Point is an exercise in filmmaking, but it’s also one that works on all fronts, something many others should take a look at to see how it’s done.” – Emilie Black, Cinema Crazed

“From the incredible acting to the expertly done cinematography to the at times astonishing set pieces, Boiling Point is the full meal.” – Daryl MacDonald, Film Inquiry