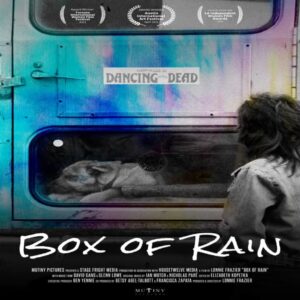 and answers the question… What do you do when you’re seventeen, suicidal, and believe that the only thing the world has to offer you is violence and pain? You get in your car and drive across the United States to go see the Grateful Dead, of course. At least, that’s what you do if you’re lucky.  In 1985, Lonnie’s life was spiraling out of control. Through a twist of fate she found healing in an unexpected place: the Deadhead community. It all started with a road

trip and free tickets to see the Grateful Dead at Red Rocks in Colorado. BOX OF RAIN is an exploration of the Deadhead family, past and present, and the qualities that make it unique. We follow Lonnie as she reconnects with the women she traveled with in her youth, and makes new friends along the way.

Through wide ranging interviews, she seeks to dispel the common stereotypes about Dead-heads and document the beauty of the community. We learn how the Grateful Dead touched the lives of so many people, the healing they found through the music, and the memories they cherish most. Twenty-five years after the road trip that started it all, Lonnie returns to Red Rocks in her quest to complete this film. On this journey, she discovers healing, and the power to write her own story. Director Lonnie Frazier  joins us for a conversation on the enduring power of the Grateful Dead’s music to inspire, and connect people to another for their own long, strange trip through life.

For updates and screenings go to: boxofrainfilm.com

BOX OF RAIN was directed and produced by Lonnie Frazier. The film has a running time of 78 minutes and will not be rated by the MPAA. Mutiny Pictures will release the film on digital platforms.

“If Deadheads aren’t an “American Experience” waiting to be remembered on PBS, I dont know what is.” – Roger Moore, Movie Nation

“A much better film when it’s telling the director’s personal story, than when it’s exploring the much-trodden subject of Deadhead culture.” – Stephen Silver, Splice Today