Boycotts have long been a tool used by Americans rallying for political change, 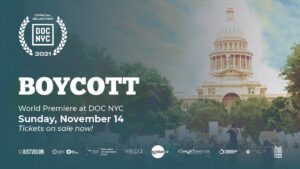 from civil rights leaders to anti-apartheid activists. But in recent years, 33 U.S. states have introduced anti-boycott legislation or executive orders designed to penalize individuals and companies who choose to boycott Israel due to its human rights record. In BOYCOTT, director Julia Bacha (Budrus, Naila and the Uprising) looks at the cases of a news publisher in Arkansas, an attorney in Arizona and a speech therapist in Texas whose

careers are threatened by the harsh measures of these new laws. A legal thriller with “accidental plaintiffs” at the center, the film is a bracing look at the far-reaching implications of anti-

boycott legislation and an inspiring tale of everyday Americans standing up to protect our rights in an age of shifting politics and threats to freedom of speech.  Director Julia Bacha stops by to talk about the intensifying efforts in the public and private sectors from around the country to criminalize free speech and freedom of association. Bacha talks about the everyday efforts of private citizens to step up and take actions to stop a perniciously undemocratic movement from spreading.

For news and ways to protect your rights go to: theboycottfilm.com

For more about the ongoing efforts, go to: justvision.org

About the filmmaker – Julia Bacha is a Peabody and Guggenheim award-winning filmmaker, media strategist, and the Creative Director at Just Vision, an organization that fills a media gap on Israel-Palestine through independent storytelling and strategic audience engagement. Julia started her filmmaking career in Cairo, where she wrote and edited Control Room (2004), for which she was nominated for the Writer‚Äôs Guild of America Award. Control Room became one of the highest grossing political documentaries of all time and introduced Americans for the first time to the inner workings of the Arab satellite channel, Al Jazeera. Subsequently, she moved to Jerusalem where she co-directed, wrote and edited Encounter Point (2006), which followed Palestinians and Israelis who risked their lives and public standing to promote an end to the occupation and the conflict. Encounter Point premiered at the Tribeca Film Festival, won best documentary prize at the San Francisco Film Festival and was broadcast on Al Arabiya to millions of viewers. Julia then directed and produced the critically-acclaimed Budrus (2009), which chronicled the story of a Palestinian community organizer who united all Palestinian factions and Israelis to save his village from destruction by Israel’s separation barrier. Subsequently, Julia directed and produced My Neighbourhood (2012), which follows a Palestinian teenager struggling to reclaim his home in East Jerusalem from Israeli settlers. The film premiered at the Tribeca Film Festival, was released online by The Guardian and won the coveted Peabody Award. Most recently, Julia directed Naila and the Uprising (2017), which chronicles the remarkable journey of Naila Ayesh whose story weaves through the most vibrant, nonviolent mobilization in Palestinian history – the First Intifada. Julia received a Guggenheim Fellowship to produce the film, which had its US premiere at DOCNYC, European Premiere at IDFA and Middle East Premiere at the Dubai Film Festival. In addition to over thirty film festival awards, Julia is the recipient of the King Hussein Leadership Prize, Search for Common Ground Award, Ridenhour Film Prize, O Globo “Faz Diferen√ßa” Prize and the PUMA Creative Impact Award. She is a Term Member at the Council on Foreign Relations, an Advisory Board Member to the Tribeca Film Institute, and a Young Global Leader at the World Economic Forum. Her TED talk, “Pay Attention to Nonviolence” was selected as one of the best talks of 2011 by the TED curators and has been viewed by over half a million people worldwide. For more go to: justvision.org