BRIAN AND CHARLES follows Brian, a lonely inventor in rural Wales, who 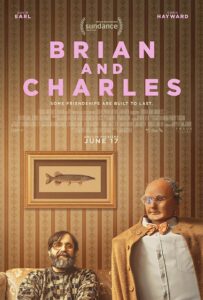 spends his days building quirky, unconventional contraptions that seldom work. Undeterred by his lack of success,  Brian decides to build a robot for company. ‘Charles’ is not only Brian’s most successful invention, but he appears to have a personality all of his own and quickly becomes Brian’s best friend, curing his loneliness and opening Brian’s eyes to a new way of living. However, Charles creates more problems than Brian bargained for, and

the timid inventor has to face-up to several issues in his life; his eccentric ways, a local bully, and the woman he’s always been fond of but never had the nerve to talk to. BRIAN & CHARLES is a feel-good comedy about friendship, love, and letting go. And a 7ft tall robot that eats cabbages. Director Jim Archer joins us for a conversation on how the project came into his life, finding the right location for evoking the off-kilter ambiance of the story and capturing the mixture of quirky, funny and endearing that has allowed BRIAN AND CHARLES take hold of audiences everywhere it has been screened.

For news and screenings go to: focusfeatures.com/brian-and-charles

About the filmmaker – Director / writer Jim Archer is a brilliant comedy director, with an understated, observational style, hailing from every single part of East Anglia. Watching TV comedies on a Friday night as a kid – Spaced, Big Train, Garth Marenghi – turned into filming sketches with friends. Biggest sketch with friends thus far is his (FOCUS features distributed) debut feature Brian and Charles, aka, “the funniest film at the sundance festival” (doesn’t sound too bad.)Has a brand new Channel 4 comedy series, Big Boys, launching at the end of May and an abundance of hilarious award winning shorts and TV already under his belt. Also does stand-up comedy above a pub in East London (now and then.) Once hit a bee with a frisbee.  For more: mindseye/director/jim-archer

“The humorous and inventive story of Brian and Charles sticks because it is so original yet familiar. It doesn’t need high-profile actors, names, and places to strike a chord because it is a high-five to the unsung, unappreciated underdog.” – Sabina Dana Plasse, Film Threat

“Here’s some Frankenstein and some Wallace and Gromit and some that is entirely Brian and Charles’s own; the mockumentary-style comedy, directed by Jim Archer, is sweet, funny, weird, and heartwarming.” – Alissa Wilkinson, Vox

“The tremendously charming voice acting from Hayward and the puppeteer work from whoever is dancing around inside that suit, aided by Hayward and Earl’s delightfully daffy script, creates in “Charles Petrescu” a character for the ages” – Jason Adams, Pajiba

“A wholesome and moving depiction of friendship and loneliness. Stay through the end credits, trust me. You’ll thank me later.” – Rosa Parra, Latinx Lens