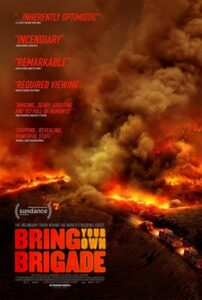 thousands of homes in the cities of Malibu and Paradise, two very different California communities. In her new verité documentary, two-time Oscar-nominated filmmaker Lucy Walker captures the heroism and horror of that unfathomable disaster. Her character-driven exposé, BRING YOUR ON BRIGADE, also answers a question humanity can no longer afford to ignore: Why are catastrophic wildfires increasing in number and severity around the world, and can anything be done to lessen the staggering death and destruction they cause? Drawing on hundreds of hours of astonishing wildfire footage and featuring interviews with survivors, firefighters and scientists, the film reveals that short of

solving global warming there are numerous, often simple steps that can be taken to not only mitigate the catastrophic devastation caused by wildfires, but restore health and balance to woodlands that have been mismanaged for far too long. But does society have

what it takes to put aside short-term interests and outmoded thinking to confront a crisis that’s quite literally burning our world to the ground? Director and Producer Lucy Walker (The Crash Reel, Waste Land, Countdown to Zero) to talk about her investigation into the reasons that social, political, climate, encroachment, logging, land management are just the beginning of why we should all be concerned about the coming Age of Fire.

About the filmmaker – LUCY WALKER (Director, Producer) is an Emmy Award®-winning British film director who has twice been nominated for an Oscar® and is renowned for creating riveting, character-driven nonfiction that delivers emotionally and narratively. The Hollywood Reporter has called her “the new Errol Morris” and Variety has praised her unique ability to connect with audiences. Walker’s films have been shortlisted for five Oscars and nominated for seven Emmys, an Independent Spirit Award, a DGA Award and a Gotham Award, winning over 100 other film awards. For her advertising work she has been recognized with three Cannes Lions, two Clios and two Association of Independent Commercial Producers Awards, among many other honors. Walker’s credits include feature documentaries The Crash Reel (2013), Waste Land (2010), Countdown to Zero (2010), Blindsight (2006), Devil’s Playground (2002) and short films such as The Tsunami and the Cherry Blossom (2011) and The Lion’s Mouth Opens (2014). Her television work includes 20 episodes of Nickelodeon “Blue’s Clues.” Walker grew up in England and graduated from Oxford University with top honors and a degree in literature. There, she directed theater and musicals before winning a Fulbright scholarship to attend the graduate film program at NYU’s Tisch School of the Arts. At Tisch she earned an M.F.A. degree and directed award-winning short films. While living in New York Walker also enjoyed a successful career as a DJ and musician. Walker is also an acclaimed virtual reality director. Her first VR experience, A History of Cuban Dance (2016), premiered at the 2016 Sundance Film Festival and showed at both SXSW and the Toronto International Film Festival. She has directed branded VR experiences for Airbnb, TOMS Shoes, Vaseline, Vice and the Buena Vista Social Club. Walker now lives in Venice, California. In 2017 she took over organizing and curating TEDxVeniceBeach and hosted a wildly successful inaugural event featuring talks by Diane von Furstenberg, Moby and Agnès Varda, among others.  For more go to: lucywalkerfilm.com

“Walker offers little in the way of hope that Californians will ever accept anything less than the fiction of complete dominance over the land and the forces of nature, despite repeated catastrophes. This film is required viewing.” – Bradley Gibson, Film Threat