Josh Duhamel (Transformers) stars in this wild and hilarious, no-holds-barred 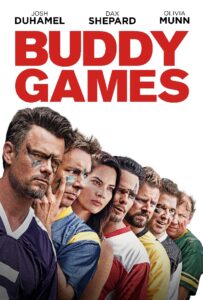 comedy. After six lifelong friends have a five year falling out, Bob (Duhamel), aka “The Bobfather”, reunites his pals for the Buddy Games, an insane competition of absurd physical and mental challenges with the chance to win a $150,000 pot. Now all bets are

off, as the determined dudes fight, claw, and party for the big bucks in this star-studded bro-fest featuring Dax Shepard (CHiPs), Olivia Munn (Office Christmas Party) and Kevin Dillon (“Entourage”). Director / Producer / Co-screenwriter Josh Duhamel stops by to talk about collaborating on the script and the actual “Buddy”games with Bob Schwartz and Jude Weng, pulling together a great comedic cast and discovering a love for directing his own projects.

For news and updates go to: paramountmovies.com/movies/buddy-games

Director’s Statement – At its core, BUDDY GAMES is a comedy, but it is also an homage to the lifelong friendships I’ve built. For many years, my friends and I have had an annual weekend of games and debauchery – everything from classic ping pong competitions to naked paintball (right off the bat, I can tell you that this is like nothing anyone has ever seen from me before). The concept always seemed like a great premise for a movie, and while I’ve always wanted to direct, I knew that the best way to start that journey in my career was to write something myself. So, I sat down with Bob Schwartz (the real life “Bobfather”) and Jude Weng to write a script based on the shenanigans that my buddies and I have done for over 20 years. My hope is that BUDDY GAMES not only shocks people and makes them curl over with laughter, but that it also resonates with people when they think of their own group of buddies, the crazy situations they find themselves in, and how much more important those friendships become as we get older. I couldn’t be more grateful for the insanely talented cast and crew who really helped tell this story. As is the goal for the audience, I think that everyone involved in this project was able to draw upon their own personal relationships, relish in the camaraderie, and have a hell of a lot of fun thinking about beating their best buddies in the ultimate competition that would win them bragging rights for life. – Josh Duhamel