BULL is a revenge thriller like no other. This ferocious, audacious, and blood- 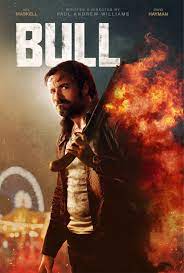 soaked is the latest from BAFTA-winning writer/director Paul Andrew Williams stars Neil Maskell (Kill List, Peaky Blinders) as Bull, a vicious mob enforcer seeking revenge on the gang that double-crossed him. Ten years after he was last seen, Bull returns home to methodically track down those who betrayed him, including his ex-wife, Sharon, played by

Tamzin Outhwaite (Eastenders) and find his beloved son. With the ominous warning: “I’m coming for all of them,” Bull stalks his former gang, leading up to a savage showdown between his wife and her mob boss father Norm, played by David Hayman (Sid and Nancy,

Macbeth). Director and writer Paul Andrew Williams  (London to Brighton, Unfinished Song, The Cottage) joins us for a conversation on his intense, brutal and perversely “logical” tale of family grievance and revenge embodied in the tenacious performances of Neil Maskell and David Hayman.

Saban Films will release the thriller BULL in Theaters on April 1st and On Demand and Digital on April 5th.

About the filmmaker – Paul Andrew Williams is an acclaimed writer and Bafta-winning director. His body of work to date includes the theatrical release of four feature films and prime-time television programming for the BBC and ITV. Paul’s films include the critically acclaimed London to Brighton, horror-comedy The Cottage, home invasion thriller Cherry Tree Lane and Song for Marion. In 2014 Paul directed Murdered by My Boyfriend for the BBC, which won the RTS Award for Single Drama and was the highest watched programme on BBC iPlayer behind Sherlock and Top Gear.  Following this he directed the critically acclaimed The Eichmann Show and in 2016/7 he was the lead director of BAFTA-winning drama series Broadchurch as well as directing the Bafta-winning Murdered For Being Different for BBC Studios. In 2018 he directed Strangers, starring John Simm and Emilia Fox, co-produced by ITV and Amazon Studios. Followed A Confession for ITV, written by Bafta winner Jeff Pope, starring Martin Freeman and Imelda Staunton. Most recently he has directed one of 4 Isolation Stories for ITV starring Angela Griffin and Darren Boyd. He has recently completed his fifth feature film ‘Bull’ with Neil Maskell and David Hayman that is due for release at the end of the year and is starting preproduction on an untitled Jeff Pope drama for ITV. Meanwhile ’The Fear Index’ which Paul co-wrote is about to start production with Left Bank pictures for Sky Atlantic.

“A must for fans of pulpy crime pictures.” – Noel Murray, Los Angeles Times

“The film’s rejiggered timeline is a little hard to follow, but the climax swings for the fences and shows an unashamed verve for tale-telling that warms the cockles.” – Nicolas Rapold, New York Times

“Fans of mean, low-budget British crime pictures in the vein of Kill List will find much to admire.” – Wendy Ide, Observer (UK)

“An incredibly stirring, chilling study of violence that is more unhinged than most others.” – Nick Allen, RogerEbert.com