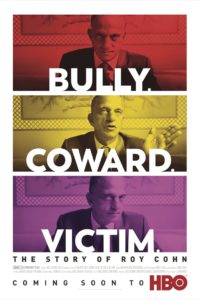 prosecuting Julius and Ethel Rosenberg in what came to be known as the “atomic spies” case. The documentary draws on extensive, newly unearthed archival material to present the most revealing examination of Roy Cohn to date. Director Ivy Meeropol (“Indian Point,” HBO’s “Heir to an Execution”) brings a unique perspective as the granddaughter of Julius and Ethel Rosenberg, having  spent much of her life feeling both repelled and fascinated by the man who prosecuted her grandparents, obtained their convictions in federal court, and then insisted on their executions. The documentary is a riveting profile chronicles Cohn’s life from the late 1950s as chief counsel to Senator Joseph McCarthy, when he first began wielding political power, through the

1980s, when he became a darling of the Reagan White House, a rabid anti-homosexuality activist and political mentor to Donald J. Trump before meeting his death from AIDS in 1986.  BULLY. COWARD. VICTIM. THE STORY OF ROY COHN includes numerous interviews, including John Waters, Cindy Adams, Alan Dershowitz, Nathan Lane and Tony Kushner, whose 2018 Pulitzer Prize and Tony-winning revival of “Angels in America”

featured Lane as Cohn. Lane offers insight into how devastatingly dangerous the actual Roy Cohn was and how he wielded power through invective and innuendo.Director Ivy Meeropol joins us to talk about one of the most renowned and reviled political figures of the last 60 years as well as the lasting impact he had on her own life, family and the country.

BULLY. COWARD. VICTIM. THE STORY OF ROY COHN debuts on HBO Thursday, June 18 at 9 PM (ET) and will also be available to stream on HBO GO, HBO NOW, and on HBO via HBO Max and other partners’ platforms. June 19 marks the 67th Anniversary of the execution of Meeropol’s grandparents, Julius and Ethel Rosenberg.

“In its loosely anecdotal way it may bring us a notch or two closer to who Roy Cohn was.” – Owen Gleiberman, Variety

“The film might complicate who Cohn was, but it does not try to humanize his actions-and some aspects of his life, his choices, and what he might’ve been thinking still remain shrouded in mystery to this day.” – Michelle Jaworski, The Daily Dot