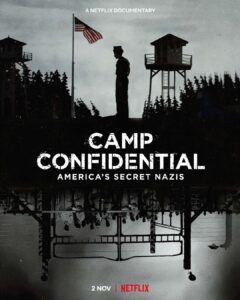 Confidential: America’s Secret Nazis, co-directed by Daniel Sivan and Mor Loushy (The Devil Next Door, The Oslo Diaries) and produced by Benji and Jono Bergmann (Wirecard, Mau), focuses on the story of a top secret POW camp that was classified for over five decades. In the midst of WWII, a group of young Jewish refugees are assigned to guard a top secret POW camp near Washington D.C. The Jewish soldiers soon discover that their prisoners are no other than Hitler’s top scientists – What starts out as an intelligence mission to gather information

from the Nazis, soon gets a shocking twist when the Jewish soldiers are tasked with a very different mission altogether. A mission that would question their moral values – exposing a dark secret from America’s past. Co-director Daniel Sivan (Mor Loushy) joins us for a conversation on this unbelievable true story of Nazi officers and scientists a few miles the the US Capital and the wildly improbable discovery of finding the survivors who were alive to tell the tale.

Watch by going to: netflix.com/Camp Confidential

About the filmmaker – Daniel Sivan is an award-winning Israeli director/producer known for his critical social-political documentaries. His works include Censored Voices (Sundance, Berlinale, BFI), Offside (Tribeca, IDFA), and The Patriot. He recently edited Death in the Terminal (executive produced by Mark Boal and Megan Ellison)—winner of an Ophir Award and a Hot Docs best mid-length documentary award.

“This fascinating documentary is one of the best things available on Netflix.” – Donal Lynch, Sunday Independent

“The piece presents a nuanced picture of the emotional toll treating Germans with decency took on men who had lost families and friends to Nazi atrocities.” – Barbara Shulgasser, Common Sense Media