Can You Bring It: Bill T. Jones and D-Man in the Waters is a feature 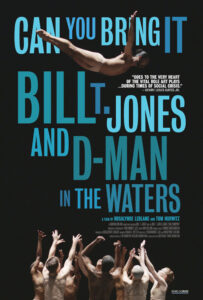 documentary that traces the history and legacy of one of the most important works of art to come out of the age of AIDS – Bill T. Jones’ tour de force ballet “D-Man in the Waters”. In 1989, “D-Man in the Waters” gave physical manifestation to the fear, anger, grief, and hope for salvation that the Bill T. Jones/Arnie Zane Company felt as they were embattled by the AIDS pandemic. As a group of young dancers reconstructs the dance, they learn about this oft forgotten history and  deepen their understanding of the power of art in a time of plague. Bill T. Jones is arguably the most socially, politically and emotionally compelling choreographer alive today. Thirty years ago, he embedded motifs of risk and sacrifice, love, loss and resurrection in the choreography for “D-Man in the Waters”.

Through an extraordinary series of interviews, archival material, and uniquely powerful cinematography of movement, this 90-minute, lyrical documentary uses the story of this dance to illustrate the triumph of the

human spirit in art and in the community. Today, by learning the dance, a new generation reinvigorates the spirit of a community fighting to survive. Co-directors Rosalynde LeBlanc and Tom Hurwitz join us for a conversation on the history of D-Man in the Waters, why it is just as relevant today, the spirit of discovery for the student dance ensemble featured in the film and the collaboration with the visionary artist Bill T. Jones.

For news and updates go to: d-mandocumentary.com

For the theatrical / virtual release go to: kinolorber.com/can-you-bring-it

Kino Lorber is proud to present CAN YOU BRING IT: BILL T. JONES AND D-MAN IN THE WATERS co-directed by Rosalynde LeBlanc and Tom Hurwitz. The film celebrated its world premiere at DOC NYC and will open in select theaters and virtual cinemas on Friday, July 16th at Film Forum in New York and on Friday, July 23rd at Laemmle’s Royal in Los Angeles, with national rollout to follow.

About the filmmaker – Rosalynde LeBlanc, Producer and Co-Director danced with the Bill T. Jones/Arnie Zane Company (1993 -1999), and Mikhail Baryshnikov’s White Oak Dance Project (1999 – 2002). She has also worked onscreen with film directors Burt Barr, John Turturro, Gretchen Bender, and Matthew Rolston. She can be seen in the short film, Roz, the PBS Specials, Still/Here, Free to Dance, Dancing in the Light, A Good Man, and in the feature film, Romance and Cigarettes. Ms. LeBlanc Loo is a leading figure in the legacy and pedagogy of Bill T. Jones. She re-stages his work around the country and runs the Jones/Zane Educational Partnership at Loyola Marymount University, where she is an Associate Professor in the Department of Dance. In 2020, her work in dance research and pedagogy was recognized with an honorary induction into the Jesuit Honor Society, Alpha Sigma Nu.

About the filmmaker – Tom Hurwitz, ASC, Co-Director and Director of Photography – Tom Hurwitz, ASC, a member of the American Society of Cinematographers, is one of America’s most honored documentary cinematographers. Winner of two Emmy Awards, the Sundance and Jerusalem Film Festival Awards for Best Cinematography, Hurwitz has photographed films that have won four academy awards and several more nominations, recently for Dancemaker and Killing in the Name. Mr. Hurwitz’s features and television programs have won dozens of awards, Emmy, Dupont, Peabody, Directors Guild and film festival awards for Best Documentary, over the last 25 years. He recently won Emmy Awards for Best Documentary Specials for the PBS show Jerome Robbins and the PBS series Franklin, as well as Sundance Awards for Queen of Versailles, and Love Free or Die. Other award-winning films and programs that Mr. Hurwitz has photographed include: Studio 54, Cradle of Champions, Joan Didion: The Center Will Not Hold, Nothing Left Unsaid: Gloria Vanderbilt and Anderson Cooper, Valentino: The Last Emperor, Harlan County USA, Wild Man Blues, My Generation, Down and Out in America, The Turandot Project, Liberty, Dolley, Faith and Doubt at Ground Zero, for PBS; and I Have a Dream, for ABC; and Killing in the Name, and Questioning Faith for HBO. In addition, films that he has directed have won the Cine Golden Eagle and have been shown in festivals around the world. Mr. Hurwitz is also a founding member of the faculty of The MFA Program in the Social Documentary Film Program at New York’s School of Visual Arts.

Bill T. Jones, Artistic Director/Co-Founder/Choreographer: Bill T. Jones/Arnie Zane Company; Artistic Director: New York Live Arts
Bill T. Jones is a multi-talented artist, choreographer, dancer, theater director and writer, and Associate Artist for the 2020 Holland Festival. Mr. Jones has received major honors including the Human Rights Campaign’s 2016 Visibility Award, 2013 National Medal of Arts to a 1994 MacArthur “Genius” Award and Kennedy Center Honors in 2010. Mr. Jones was honored with the 2014 Doris Duke Performing Artist Award, recognized as Officier de l’Ordre des Arts et des Lettres by the French government in 2010, inducted into the American Academy of Arts & Sciences in 2009 and named “An Irreplaceable Dance Treasure” by the Dance Heritage Coalition in 2000. His ventures into Broadway theater resulted in a 2010 Tony Award for Best Choreography in the critically acclaimed FELA!, the musical which was co-conceived, co-written, directed and choreographed by Mr. Jones. He also earned a 2007 Tony Award for Best Choreography in Spring Awakening as well as an Obie Award for the show’s 2006 off-Broadway run. His choreography for the off-Broadway production of The Seven earned him a 2006 Lucille Lortel Award. Mr. Jones began his dance training at the State University of New York at Binghamton (SUNY), where he studied classical ballet and modern dance. After living in Amsterdam, Mr. Jones returned to SUNY, where he became co-founder of the American Dance Asylum in 1973. In 1982 he formed the Bill T. Jones/Arnie Zane Company (then called Bill T. Jones/Arnie Zane & Company) with his late partner, Arnie Zane. Mr. Jones is currently Artistic Director of New York Lives Arts, an organization that strives to create a robust framework in support of the nation’s dance and movement-based artists through new approaches to producing, presenting and educating. For more go to: newyorklivearts.org

“It’s a fertile idea, beautifully executed. We learn as they learn what the piece means, and why it has endured.” – Joe Morgenstern, Wall Street Journal

“A celebration of the process of creation.” – Sheila O’Malley, RogerEbert.com

“Can You Bring It” is most compelling as an archival work. An early section pairs the original dancers’ memories of the piece’s development with visuals of the corresponding movement, sharply telegraphing the viewer into the creative process.” – Jude Dry, indieWire

“Can You Bring It is full of vitality and energy, a testament to the power of art in the face of tragedy.” – Kimber Myers, Los Angeles Times