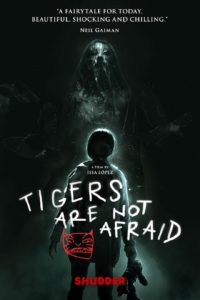 town.The young 10-year-old girl Estrella (Paulo Lara) has 3 wishes: The first one, that her missing mother comes back and it happens. Her mother returns but she is dead and follows Estrella everywhere. Petrified, Estrella tries to escape from her by joining a gang orphaned by violence. Soon she realizes that dead are never left behind and when you are in the middle of brutality and violence, wishes never come true the way you want them to be. A haunting horror fairytale set against the backdrop of Mexico’s devastating drug wars, TIGERS ARE NOT AFRAID follows a group of orphaned children armed with three magical wishes, running from the ghosts that haunt them and the cartel that murdered their parents. Filmmaker Issa López

creates a world that recalls the early films of Guillermo del Toro, imbued with her own gritty urban spin on magical realism to conjure a wholly unique experience that audiences will not soon forget. Director / writer Issa López joins us to talk about her inventive and viscerally chilling film about dreams, politics, violence against the powerless and justice.

For news, screenings and updates go to: tigersarenotafraid.com

“Issa Lopez is an incredibly exciting filmmaker who, if there is any justice, will go onto have a career comparable to Guillermo del Toro.” – Fiona Underhill, JumpCut Online

“Heartbreaking, thought-provoking and exquisitely beautiful in equal measure, López unflinchingly rejects the fetishization of young people and their experiences so typical of narratives about childhood trauma.” – Alexandra Heller-Nicholas, AWFJ Women on Film

“What it gets right, it does brilliantly. The acting is superb, the mix of fantasy and realistic drama is sublime, and the story is haunting and fascinating in equal measure.” – Bobby LePire. Film Threat

“Watching Tigers Are Not Afraid is like stepping into a enchanting nightmare. There’s an uncomfortable darkness wrapped up in a charming package.” – Kat Hughes, The Hollywood News