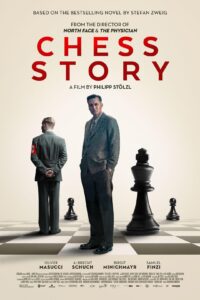 is preparing to flee to America with his wife Anna when he is arrested by the Gestapo. As a former notary to the deposed Austrian aristocracy, he is told to help the local Gestapo leader gain access to their private bank accounts in order to fund the Nazi regime. Refusing to cooperate, Bartok is locked in solitary confinement. Just as his mind is beginning to crack, Bartok happens upon a book of famous chess games. To withstand the torture of isolation, Bartok disappears into the world of chess, maintaining his sanity only by memorizing every move. As the

action flashes forward to a transatlantic crossing on which he is a passenger, it seems as though Bartok has finally found freedom. But recounting his story to his fellow travelers, it’s clear that his encounters with both the Gestapo and with the royal game i

For more go to: filmmovement.com/chess-story

About the filmmaker – Philipp Stölzl was born in Munich in 1967 and began his career as a stage designer. His work as a director began in 1997 with advertising films and music videos for significant international artists including Rammstein, Marius Müller-Westernhagen, Pavarotti, Madonna and Mick Jagger. His passion for the theatre remained; which is why the versatile director works for the cinema and the stage in equal measure. Stölzl made his cinema debut in 2005 with Baby. His second film as a director, North Face (2008), was a big box-office hit and in addition to several national and international nominations won the German Film Award for Best Cinematography and the German Critics’ Award for Best Screenplay. Further popular and award-winning films ensued, including Goethe! (2010) and the international bestseller adaptation The Physician (2013), which attracted several million German cinemagoers. Stölzl’s latest hit movie was the star-studded musical adaptation I’ve Never Been to New York in 2019, for which he won the Special Award at the Bavarian Film Awards.

“Mournful and just cryptic enough to leave you guessing what you just saw, but touched, engaged and intrigued by it’ – Roger Moore, Movie Nation

“Philipp Stölzl craftily melds the genres of period drama and psychological thriller, not for the purposes of reheated nostalgia, but to shed a cold light on the recursions of historical trauma.” – William Repass, Slant Magazine

“draws the viewer deep into the experience of the protagonist, with Oliver Masucci delivering a strong performance as Dr. Josef Bartok. It is a very distressing film and difficult to view, in its depiction of emotional and psychological suffering.” – Ayelet Dekel, Midnight East