From Emmy® Award-winner Rex Miller and Academy Award®-nominated and 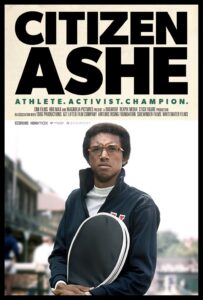 Emmy® Award-winning filmmaker Sam Pollard comes a new documentary about the first male African American, CITIZEN ASHE. The film is an exploration of the legacy of tennis great and humanitarian Arthur Ashe. Ashe, who would have turned 78 last month, died of AIDS-related complications in 1993.   His storied tennis career is only surpassed in esteem by his off-court activism on behalf of civil rights, global human rights, and compassion for those afflicted by HIV.  Using a blend of archival newsreel and family footage, Miller and Pollard take viewers along Ashe’s personal evolution, beginning with a youth deeply influenced by his early tennis mentor and the death of his mother. His elegant technical form

helped him play at the highest of elite levels in tennis, a sport which, even today, has few non-white professional players. Contemporary interviews with Ashe’s widow, Jeanne Moutousammy-Ashe, his brother, Johnnie Ashe, as well as fellow tennis legends

Billie Jean King, John McEnroe, Donald Dell, and Lenny Simpson, and activist Prof. Harry Edwards, illustrate the cultural resonance of his historic Grand Slam wins, and how he managed a quiet, stoic dignity in public, despite the racism he endured throughout his life and career.  He really is an inspiration who used his celebrity to focus attention on injustice in America, and beyond. Co-director Rex Miller (Sam Pollard) joins us to talk about the life and times of the country’s greatest male African-American tennis champion and a humanitarian of the highest order.

For news and screening go to: magpictures.com/citizenashe

Citizen Ashe is playing theatrically on December 3rd in NYC and December 10th in LA.

About the filmmaker – Director/Cinematographer Rex Miller is a visual storyteller with an extensive background as a photographer/filmmaker, having started originally as a photographer working for local, national and international newspapers and magazines in New York City, after growing up there on the blue collar streets of Queens. His mother emigrated to NY from Jamaica, West Indies and is of Poruguese, African, Indian and Jewish descent. His photography clients have included ABC News, American Express, Atlantic Records, Calvin Klein, CBS, Forbes, John Kennedy, Jr., John McEnroe, McDonald’s, Musician, Newsweek, New York Magazine, The New York Times, Nickelodeon, the Robin Hood Foundation, Rolling Stone, Spin, Sony Music, and Time. In 1997 Miller completed “All The Blues Gone”, a hardcover book/CD package documenting Mississippi blues culture. “All The Blues Gone” has been widely exhibited in the U.S. and overseas.  For the last 15 years, he has been directing, producing and shooting independent documentary films, as well as content for television. His work has appeared on HBO, PBS National, Tennis Channel, Starz, and screened at major national and international film festivals, including Sundance, Venice, Berlin, NY Film Festival, Full Frame and South Africa. He has been part of 2 Peabody-Award-Winning projects, several Emmy winners and was twice nominated for an Emmy for Cinematography.  Recent projects as Director include the documentaries,  ALTHEA (2015, PBS), SOMAY KU: A Uganda Tennis Story and Behind These Walls, both of which aired on Tennis Channel. Recent work as Cinematographer includes the documentaries Private Violence (HBO) and The Loving Story (HBO), the series A Chef’s Life (PBS—currently in Season 5) and work for the directors Steven Cantor, Sam Pollard, AJ Schnack, Jesse Moss, Brad Lichtenstein, Cynthia Hill and Katy Chattoo Boerum. He recently shot an 8-hour Verite series on the NASCAR team Hendrick Motor Sports. He is currently Directing/Producing a feature documentary on 1968 and Arthur Ashe. For more go to: rexpix.com

“It’s a compelling life story of a man who refused to be bullied, eschewing use of his early celebrity as a tool in the thick of the civil rights struggle, only to eventually become a leader in the fight for racial justice and equality.” – Tambay Obenson, indieWire

“Less a tennis documentary than about the evolution of a tennis star, a Black American who figured out how to engage with the world beyond established rules and white lines both literal and figurative.” – Robert Abele, TheWrap

“There is gravitas in every minute…The film also goes a long way to restore Ashe to the conversation. He was a great athlete and citizen of the world, on and off the court, and every generation should be reminded of that.” – Jeff York, The Establishing Shot

“This is a fitting tribute to a humble pioneer, chronicling his importance during his era and his lasting legacy in ours.” – Tim Grierson, Screen International