CLARA SOLA drops us into a remote village in Costa Rica, 40-year-old Clara 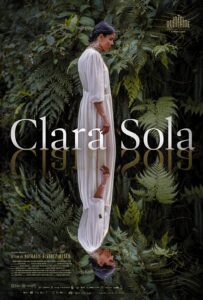 (Wendy Chinchilla Araya) who endures a repressively religious and withdrawn life under the command of her mother (Flor María Vargas Chaves). Clara is believed to have a special connection to God. As a “healer”, she sustains a family and a village in need of hope, while she finds solace in her relationship with the natural world. After years of being controlled by her mother’s repressive care, Clara’s sexual desires are stirred by her attraction to her niece’s new boyfriend. Tension builds within the family as Clara’s younger niece (Ana

Empowered by her self-discovery, Clara gradually frees herself from her role as “saint” and begins to heal herself. Director and co-screenwriter Nathalie Alvarez Mesén joins us for a conversation on her enthralling and beautifully drawn character study of a complex and determined woman, finding the right setting for the story, and eliciting a slew of captivating performances, led by Wendy Chinchilla Araya as Clara.

For updates and screenings go to: clarasola.oscilloscope.net

About the filmmaker – Nathalie Álvarez Mesén is a Costa Rican-Swedish screenwriter/director. Her debut feature film CLARA SOLA premiered in Cannes 2021 in the Director’s Fortnight section. She started her career in physical theater in Costa Rica before pursuing her B.F.A. degree in Mime Acting at the Stockholm University of the Arts in Sweden. Nathalie later graduated from Columbia University’s Graduate Film Program in NYC with an M.F.A. in Film Directing/Screenwriting. An alumna of the Berlinale Talents, TIFF Filmmaker Lab and NYFF Artist Academy, Nathalie’s shorts have screened at film festivals all over the world. Her short, FILIP, won Best Film Under 15 Minutes at the 2016 Palm Springs Shortfest, and ASUNDER, screened at the 2016 Telluride Film Festival. Nathalie also co-wrote ENTRE TÚ Y MILAGROS, winner of the Orizzonti Award for Best Short in the Venice Film Festival 2020 and she is developing her second feature, THE WOLF WILL TEAR YOUR IMMACULATE HANDS, in the Torino ScriptLab 2021.

“Álvarez Mesén’s alchemy keeps the hidden without revealing itself … the finesse of her craft condenses a film that addresses the initiation of love as well as the terror in the abysses of madness.” – Icnitl Y García, Butaca Ancha