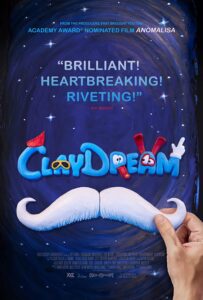 into the world of the “Father of Claymation,” Will

Vinton as he revolutionized the animation business during the 1980s and 90s, creating such iconic characters as the California Raisins and Domino’s The Noid. But after thirty years of being the unheralded king of clay, Vinton’s carefully sculpted American dream came crumbling down. Structured around interviews with this charismatic pioneer and his close

collaborators, along with a treasure trove of clips of their work together, CLAYDREAM charts  the rise and fall of the Oscar®- and Emmy®-winning Will Vinton Studios. Director, screenwriter and producer Marq Evans joins us for a conversation on the challenges of bringing to life the battle between art and commerce in this affectionate, insightful portrait of an artist who put so much of himself into his craft.

For news and screenings go to: claydream.oscilloscope.net

About the filmmaker – Marq Evans is an award-winning independent filmmaker and creative entrepreneur. His most recent documentary, CLAYDREAM, premiered at the 2021 Tribeca Film Festival to critical acclaim. His debut feature film, THE GLAMOUR & THE SQUALOR, won top prize at film festivals around the world and was named one of the Top 20 music documentaries of all time by American Songwriter. He is represented by XYZ Talent Management. In addition to film, Marq has produced commercials for clients including the Smithsonian Institute, U.S. Navy, the government of Haiti and Clinton Global Initiative. With his wife, Angela, and son, Jude, Marq leads The McCaw, a boutique creative studio. The family business creates film, books, photography and other unclassifiable works such as the Cow by Bear dinner party experience. Marq holds an MFA from Vermont College of Fine Arts and a bachelor’s degree in Business Administration from Washington State University. He lives and works in Bremerton, Washington where he teaches Digital Filmmaking at Olympic College.

“A must for animation history fans! Answers almost all that you ever wondered about the rise and fall of “Claymation” – and its corporate re-birth as Laika Studios.” – Nora Lee Mandel, Maven’s Nest

“The story of a pioneer of American animation, and how he was denied his rightful place.” – Stephen Silver, Tilt Magazine

“The career-highlights structure is perhaps overly familiar, but “Claydream” benefits from extensive interviews with Vinton and his many associates, and from the fact that Claymation is an engaging onscreen subject.” – Ben Kenigsberg, New York Times

“Through copious clips of studio work and bittersweet interviews with Vinton, his former colleagues, and his family members, we get a sense of both his strengths and weaknesses.” – Elizabeth Weitzman, TheWrap

“Evans’ take on Vinton is sympathetic, but his film’s strength is its attention to the complexities of a man who was closed off from his own feelings.” – Sheri Linden, Hollywood Reporter