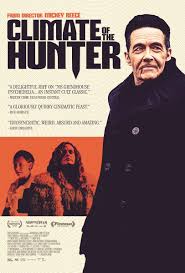 HUNTER immerses us inhttps://youtu.be/vOT3l77LTZc the story of two sisters, Alma and Elizabeth, along with a dog who’s described as a “philosopher,” have come to Alma’s remote house to reconnect with Wesley after twenty years. Alma is recently divorced, Elizabeth is a workaholic in Washington, D.C., while Wesley lives in Paris dealing with a wife recently struck with a fatal disease. When the three come together for dinner it has all the makings of a lovely adult melodrama about

loneliness, and the desire to connect and share our lives with someone… but we must add to the mix one otherworldly piece of information: Wesley could be a vampire. CLIMATE OF THE HUNTER stars Ginger Gilmartin, Mary Buss, Ben Hall, Danielle Evon Ploeger, Laurie Cummings, and Jacob Ryan Snovel. Director Mickey Reece (Arrows of Outrageous Fortune, Mono) joins us to talk about his shadowy slow-burn, stylized cinematic mind-f**k of a story.

For news and updates go to: darkstarpics.com

“Climate of the Hunter never sacrifices its smarts for fun (or vice versa), but with its dazzling visuals and hypnotic descent downwards into a seemingly inevitable chaos, the film’s delights are ultimately as sensorial as they are intellectual” – Alexandra Heller-Nicholas, AWFJ Women on Film

“Climate of the Hunter captures the 1970s perfectly and crafts a beautiful film filled with a central mystery that builds in every revelation.” – Amanda Mazzillo, Film Inquiry

“Climate of the Hunter is for anybody who, when dining out, feels compelled to try (and hopes to love) the weirdest item on the menu.” – Simon Abrams, RogerEbert.com

“This weird little slice of vampire movies is definitely not your average bloodfest. It’s odd and dreamlike and one of my favorite films I’ve seen so far this year. So give it a shot!” – Lorry Kikta, Film Threat