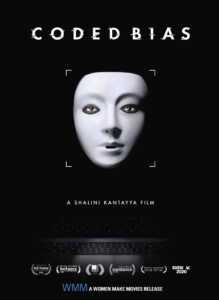 Buolamwini’s startling discovery, technology based bias is real. Modern society sits at the intersection of two crucial questions: What does it mean when artificial intelligence increasingly governs our liberties? And what are the consequences for the people AI is biased against? When MIT Media Lab researcher Joy Buolamwini discovers that most facial-recognition software does not accurately identify darker-skinned

faces and the faces of women, she delves into an investigation of widespread bias in algorithms. As it turns out, artificial intelligence is not neutral, and women are leading the charge to ensure our civil rights are protected. Director Shalini Kantayya (Catching the Sun) joins us for a conversation on computerized racial, political, sexual, social, financial, cultural bias and how it is here now and what, if any, way that people can do anything reform it or stop it from determining our collective future.

For news, updates and screenings go to: codedbias.com

About the filmmaker: Director Shalini Kantayya’s feature documentary, CODED BIAS, premiered at the 2020 Sundance Film Festival. She directed an episode of the National Geographic television series Breakthrough, Executive Produced by Ron Howard, broadcast globally in 2017. Her debut feature film Catching the Sun, premiered at the Los Angeles Film Festival and was named a New York Times Critics’ Pick. Catching the Sun released globally on Netflix on Earth Day 2016 with Executive Producer Leonardo DiCaprio, and was nominated for the Environmental Media Association Award for Best Documentary. She is an Associate of the UC Berkeley Graduate School of Journalism. shalinikantayya.net

“Racial bias, algorithms, facial recognition and badass women of color put our government on blast for using technology while rolling back privacy and Civil Rights in America. Joy Buolamwini and Shalini Kantayya should get a Nobel Peace Prize!” – Carla Renata, The Curvy Film Critic

“In a time where we as consumers instill unrelenting trust in the people behind the screen, there has never been a more vital documentary.” – Stephanie Archer, Film Inquiry

“Without shying away the issue’s enormity or its devastating consequences, Coded Bias gradually works toward almost inspirational vibe, as Buolamwini and others get to work solving the problem they’ve identified. – Angie Han, Mashable

“Kantayya makes a strong and compelling argument that everyone needs to pay attention to. Not only do we need to be talking about this, but we, the people, need to be doing more about this.” – Amyana Bartley, QBP Reviews