CODED: THE HIDDEN LOVE OF J.C. LEYENDECKER tells the story of legendary 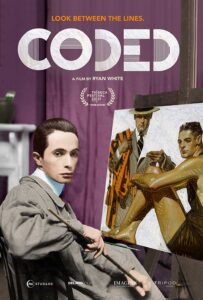 illustrator J.C. Leyendecker, a gay man, whose early-20th century advertisements were coded with LGBTQ+  imagery that quietly acknowledged and spoke directly to a community that was forced to live in the closet. The Coded: The Hidden Love of J. C. Leyendecker explores Leyendecker’s legacy as a grandfather of modern advertising, connecting how today’s LGBTQ+ advertisements are built upon a foundation laid by his work. Despite being one of the most prominent artists of his time, and with more Saturday Evening Post

covers than Norman Rockwell, Leyendecker’s story has been largely untold, further demonstrating how the struggle for LGBTQ+ visibility never ends. Director Ryan White (Assassins, The Case Against 8) joins us for a conversation on enlisting the voice-over talents of Neil Patrick Harris, his decision to ell the story of a gay man born in the 19th century, incredibly success at his craft, forced to hide who he was and how his sexuality eventually led to his fall into poverty and disgrace.

To find out more go to: tripod-media.com

About the filmmaker- Ryan White is the director of Coded, which won best documentary short at Tribeca and was shortlisted for the Academy Award. He is also the director of Assassins, which premiered at Sundance and tells the story of the brazen murder of Kim Jong-nam, the half brother of the North Korean leader, and the trial of his two female assassins. In 2020, he directed Visible: Out on Television, the first documentary series on Apple TV+. The five-part series explores the history of the LGBTQ movement through the lens of television. In addition, White is the director of Ask Dr. Ruth (Hulu), a documentary portrait that chronicles the incredible life of Dr. Ruth Westheimer, a Holocaust survivor who became America’s most famous sex therapist. White also directed The Keepers, an Emmy-nominated seven-part Netflix documentary series that investigates the unsolved murder of a young nun in Baltimore and the horrific secrets and pain that linger nearly five decades after her death. White also directed The Case Against 8, a behind-the-scenes look at the five-year battle to overturn Proposition 8. The film won the Directing Award at Sundance, had its broadcast premiere on HBO, was nominated for two Emmys and was shortlisted for the Academy Award for Best Documentary. White directed Serena (Epix), a year in the life of tennis legend Serena Williams, Good Ol’ Freda (Magnolia Pictures), which tells the story of the Beatles’ longtime secretary Freda Kelly, and Pelada (PBS, Cinetic), a journey around the world through the lens of pick-up soccer. White graduated from Duke University with a focus on Documentary Studies. For more go to: tripod-media.com