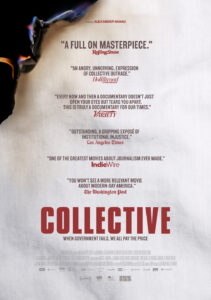 verite  look behind the curtain of the pervasive corruption of Romania’s Health Ministry. Collective is a scathing examination of the 2015, a fire at Bucharest’s Colectiv club. A fire that leaves 27 dead and 180 injured. Soon, more burn victims begin dying in hospitals from wounds that were not life-threatening. When a doctor blows the whistle on the misuse and abuse of medical protocols and treatments at the facility specializing in burn victim recovery a team of investigative journalists jump into the fray. One revelation leads to another as the journalists start to

uncover vast health care fraud. When a new health minister is appointed, he offers unprecedented access to his efforts to reform the corrupt system but also to the obstacles he faces. Following journalists, whistle-blowers, burn victims, and government officials, Collective is an uncompromising look at the impact of investigative journalism at its best. Collective Director Alexander Nanua joins us for a conversation on his remarkable access to the inner circle of the reform-minded new minister and how naked greed and corruption led to deaths of far too many innocent victims.

For news, updates and screenings go to: collectivemovie.com

About the filmmaker – Alexander Nanau was born in Bucharest, Romania in 1979. His family belongs to the Transylvanian Saxons, a cultural minority of German descent who lived since generations in Romania. 1990 they emigrated to Germany and became German citizens. Nanau studied Film Direction at the renowned DFFB in Berlin. His first feature documentary Peter Zadek inszeniert Peer Gynt was released 2006 in Germany and Austria. In 2007 he was a scholarship holder of the Academy of Arts in Berlin. In 2008/2009 he co-produced with HBO Romania, directed and shot the documentary The World According to Ion B. about a 62 years homeless man who starts a career in the international art world with collages he made over the last 30 years. The documentary was selected for over 40 international film festivals and won the prestigious ‘International Emmy Award’ for Arts Programming in 2010. His third feature documentary Toto and His Sisters, produced together with HBO Europe, premiered at the San Sebastian Film Festival in the ‘New Directors’ section. The film won major awards at the international film festivals in Angers, Zurich, Warsaw, Jihlava, Leipzig and Sarajevo. It was nominated as ‘Best Documentary’ at the European Film Awards 2015 and won the international Cinema Eye Honors’ Spotlight Award 2016.

“Collective gives us a glimpse of the top-the gangster hospital managers and the government functionaries who appointed them, all helping themselves to taxpayer money while providing care that kills.” – Amy Taubin, Artforum

“Collective is a documentary that grows progressively more frightening, infuriating, and illuminating the longer one sits with it.” – Andrew Parker,The Gate

“A documentary pulsing with an urgency that’s impossible to ignore and a furious sense of anger that’s genuinely palpable.” – Doug Jamieson, The Jam Report

Although he is dealing specifically with one instance in Romania, it’s easy to see evidence of greater global malaise reflected here. – Amber Wilkinson, Eye for Film