Long before COVID-19, another pandemic was raging across the 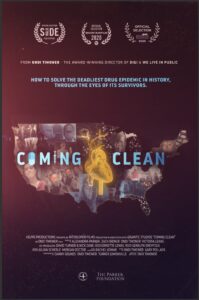 American landscape, penetrating all age groups, races and socio-economic classes. The cause: opioids. The culprit: Purdue Pharmaceutical and the company’s deceitful approach to lure in and hook patients. COMING CLEAN, Ondi Timoner’s new documentary, examines opioid addiction through the eyes of those affected and political leaders, as they come together to bring the profiteers to justice. Timoner deeply engages us by weaving in personal stories of addicts and their families struggling to overcome this painful addiction, sometimes with success but often with devastating and heart-wrenching consequences. COMING CLEAN presents a clear case against the perpetrators, including how they incentivized physicians to overprescribe opioids. In a hopeful turn, we

witness the alliances built between addicts in recovery and policymakers as they work to remove the stigmas surrounding this addiction and impact laws and industries to bring necessary change in communities. A thought-provoking film on the state of our country and the current political landscape. Director Ondi Timoner (DIG!, We Live in Public, JUNGLETOWN) joins us to talk about the corrosive impact of the opioid crisis, the devastating impact it has had on families, communities and our vital institutions and who has been most responsible for this scourge.

For news and updates go to: comingcleanmovie.com

About the filmmaker- Ondi Timoner has the rare distinction of winning the Grand Jury Prize at the Sundance Film Festival twice, for DIG! (2004) and WE LIVE IN PUBLIC (2009). Other award-winning features include: THE NATURE OF THE BEAST (1994), JOIN US (2007), COOL IT (2010), BRAND: A SECOND COMING (2015), and MAPPLETHORPE (2018), a scripted film she wrote and directed, starring Matt Smith. She also created and produced the critically acclaimed 10-hour nonfiction series JUNGLETOWN (2017). Ondi Timoner is a member of the Academy of Motion Picture Arts & Sciences, the DGA, the PGA, the International Documentary Association, and Film Fatales. Timoner has produced & hosted BYOD (Bring Your Own Doc) for thelip.tv,  creating 300 episodes with the top documentary filmmakers over five years. She is also the Founder & CEA of A TOTAL DISRUPTION, an online network dedicated to telling the stories of entrepreneurs & artists who use technology to innovate the way we live. For more on Ondi Timoner films: interloperfilms.com

“A movie about opiates most viewers won’t take their eyes off of. It feels weird to compliment a true-life story on such a dark topic for visual beauty, but it’s the truth.” – Films Gone Wild

“COMING CLEAN takes one of the most important issues of our time — declining life expectancy, largely due to the opioid crisis — and unpacks it through a humanistic lens, with emphasis on real people and leaders on the ground who are providing solutions and, most importantly, hope. As thought-provoking as it is moving — and you find yourself rooting for these heroes and thinking about what they’ve taught you long after the film credits roll. The stigma-shattering message of this film will make a difference.” – Beth Macy, bestselling author of Dopesick & writer/producer of coming Hulu series Dopesick

“Coming Clean is an indictment of capitalism run rampant and once again profit taking precedence over human life. Hats off to the frontline warriors taking on this cause.” – Bradley Gibson, Film Threat