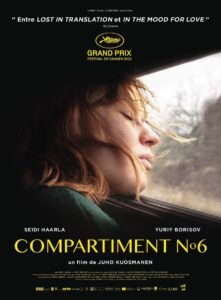 COMPARTMENT No. 6 follows the trek of a young Finnish woman as she escapes an enigmatic love affair in Moscow by boarding

a train to the arctic port of Murmansk in search of ancient petroglyphs. Forced to share the long ride and a tiny sleeping car with a Russian miner, the unexpected encounter leads the occupants of Compartment No. 6 to face the truth about their own yearning for human connection.  COMPARTMENT No. 6 was co-written and directed by Juho Kuosmanen, and features brilliant performances by Seidi Haarla and Yuri Borisov.  COMPARTMENT No. 6 is based 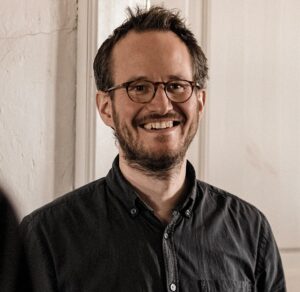 on Rosa Liksom‘s 2011 novel of the same name.  The film was selected to compete for the Palme d’Or at the 2021 Cannes Film Festival as well as the

Finnish entry for the Best International Feature Film at the 94th Academy Awards. The film was recently shortlisted for Best International Feature Film. Director / co-writer Juho Kuosmanen joins us for a conversation on his inspiration for this muted love story, the logistical challenges of filming in Arctic-like weather, and the stellar performances from his lead performers.

For news and updates go to sonyclassics.com/film/compartmentno6

For more go to: totem-films.com/compartment-n6

Compartment No. 6 is short listed for the Academy Award in the International Feature Film category

About the filmmaker – Juho Kuosmanen was born in Kokkola, Finland, and is now based in Helsinki. Since graduating from ELO Helsinki Film School he has directed for film, theatre, and opera. His short films include Roadmarkers (2007), Citizens (2008), and The Painting Sellers (2010), and he directed the feature The Happiest Day in the Life of Olli Mäki (2016), which screened at the Festival. Compartment No. 6 (2021) is his latest film.

“It makes for a take on the love story as fresh, resonant and honest… as you’ll find in a contemporary film.” – Robert Abele, Los Angeles Times

“An intimate and endearing story of discoveries, chance encounters and indelible life lessons where the journey is more important than the final destination.” – Rene Sanchez, Cine Sin Fronteras

“Seida Haarla gives a winning, intelligent performance as a naturally very clever person made to feel small and helpless in a strange land. But Yuriy Borisov pops from the first moments you see him…” – Mark Asch, Little White Lies

“Compartment No. 6 is a profound character study that evolves in time into something of a romantic drama. The smart ending ensures that we come away with more than that.” – Barbara Goslawski, That Shelf

“It’s a picture that is witnessed, that is felt, and that is experiential. No amount of recounting can do justice to what exactly it feels like to view Juho’s texturous tale…” – Taylor Baker, Drink in the Movies

“An engrossingly offbeat rail movie (…) Fully modulated yet natural performances by the two leads, Seidi Haarla and Yuriy Borisov, walk us through the human condition with the nuances of a big Russian novel.” – Deborah Young, The Film Verdict