An epic collaboration that spans eight countries and 9 individual 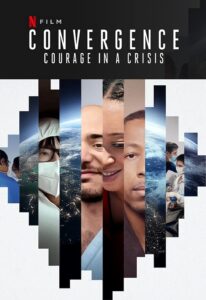 stories, Convergence reveals the power of compassion and community in the face of a crisis. Beginning at the onset of the pandemic, the documentary follows everyday citizens across the globe as they rise to the challenges of this upheaval in extraordinary ways — from a Syrian refugee fighting the UK government to include hospital cleaners and porters in bereavement pay to a doctor committed to serving Miami’s homeless community. But as this generation defining crisis begins to

unmask deep-rooted flaws and inequities worldwide, their diverse journeys tell a more unified narrative about our common humanity and

Mauricio Montiero Filho (Brazil), Mohammad Reza Eyni (Iran), Sara Khaki (Iran) Wenhua Lin (China), as well as producers Don Coogan and Liz Garbus.  Director Orlando von Einsiedel and Director Hassan Akkad joins us for a conversation on capturing the sweep of the pandemic on distressed public health systems from around the world while focused on the deeply humanistic stories of families and health care workers behind the infection rates and deaths.

Watch on netflix.com/Convergence: Courage in a Crisis

About the filmmaker – Orlando von Einsiedel is the Oscar-winning director of short documentary, The White Helmets. His first feature documentary, the Bafta and Academy-Award nominated documentary, Virunga won over 50 international film awards including an Emmy, a Peabody, a Grierson and a duPont-Columbia Award for outstanding journalism. He is a former professional snowboarder and lives in London, UK. Virunga (2014), The White Helmets (2016), Lost and Found (V) (2019), Skateistan: To Live and Skate Kabul (2011).

“A stirring tribute to the sheer incalculable nature of the sacrifice made by countless caregivers.” – Matt Fagerholm, RogerEbert.com

“It’s one of the best documentaries of 2021.” – Randy Myers. San Jose Mercury News