While making a documentary about the Anglo-American coup in Iran in 1953, 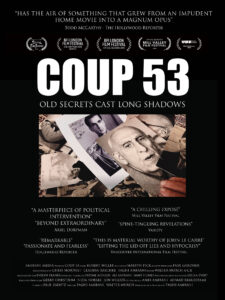 director Taghi Amirani and editor Walter Murch (Apocalypse Now, Godfather II) discovered extraordinary, never-before-seen archival material that had been hidden for decades. The 16mm footage and documents they uncovered not only allowed them to tell the story of the overthrow of the Iranian government in unprecedented detail, but it also led to explosive revelations about dark secrets buried for 67 years. Working with Ralph Fiennes (The Grand Budapest Hotel, Schindler’s List, The English Patient) to help bring the lost material to life, what begins as a historical documentary about four days in

August 1953 turns into a live investigation, taking the filmmakers into uncharted cinematic waters. Ten years in the making, COUP 53 tells the story of the 1953 the Anglo-American coup d’état that overthrew Iran’s government of Prime Minister Mohammad Mossadegh and reinstalled the Shah. The CIA/MI6 covert action

was called Operation Ajax. It was all about Iran’s oil and who gets to control and benefit from it. BP was at the heart of this story. Shot in seven countries, featuring participants and first-hand witnesses, and unearthing never seen before archive material, COUP 53 is a politically explosive and cinematically innovative documentary that lifts the lid on secrets buried for over sixty-six years. Director Taghi Armirani and Editor / Writer Walter Murch join us to talk about their own journey to tell the definitive story behind one of the 20th Century’s most consequential geo-political events.

For news and updates go to:coup53.com

To watch go to: coup53.com/screenings

“BREATHTAKING. THE MOST ENTHRALLING AND REVELATORY DOCUMENTARY I’VE SEEN OVER THE PAST YEAR. Remarkable. Taghi Amirani’s passionate and fearless work grew from an impudent home movie into a magnum opus.” – Todd McCarthy, The Hollywood Reporter

“As compelling as a John Le Carré novel or a Costa-Gavras classic.” – Allan Hunter, Screen International

“This is big.” – Werner Herzog, Filmmaker