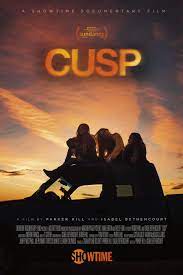 military town, meet and befriend photographers and debut filmmakers Parker Hill and Isabel Bethencourt in a chance encounter one evening. During a road trip across America, documenting snapshots of carefree adolescent summers, Hill and Bethencourt are inspired to film the

examining what it means to confront the dark realities of female adolescence. Though the girls’ experiences arecompletely unique to their upbringing, CUSP is also a strikingly

universal coming-of-age tale — and true-to-life, at turns funny, tragic, complicated, and stirring. Co-directors Parker Hill and Isabel Bethencourt join us for a conversation on the happenstance that brought them into these young women’s life, the sparse economic and educational opportunities available to Brittney, Aaloni, and Autumn, and the specter of violence that shadows too many of their relationships.

For news, updates and screenings go to: cuspthefilm.com

PARKER HILL (Director, Cinematographer, Editor) Parker Hill: Hill is a New York City–based writer-director who graduated from New York University’s Tisch School of the Arts. Her thesis film, One Good Pitch, premiered at the 2016 Tribeca Film Festival. Her short films Homing In and Sanderson to Brackettville have screened at BFI London Film Festival and online as a Vimeo Staff Pick, respectively. Cusp is her debut feature documentary.

ISABEL BETHENCOURT (Director, Cinematographer) Isabel Bethencourt is a filmmaker from a beach near Los Angeles, California. Her work as a director and cinematographer has been published by the Wall Street Journal, ESPN, GQ, and Teen Vogue. Cusp is her first feature documentary.

Director’s statement – Cusp started from a photo road trip. We were driving from Montana to Texas in an RV, and on our last night, at 2:30 in the morning, at a gas station in the middle of nowhere, we met a group of girls in a pickup truck. We were filling up our tank when a truck swerved into the station and slammed to a stop. Four teenage girls spill out of the cab, mostly barefoot, blasting music and screaming jokes at each other. They were the epitome of a wild summer night. We went over and asked to take their picture, and we immediately got along. They invited us back to their friends house to hang out, and we were thrown headfirst into their world. As they sped down a dusty back road at 70 mph, and jumped into a pitch-black river without thinking twice, we were captivated by their electric energy, the pure freedom of their adolescence in a seemingly pastoral, rural setting. We described them as the perfect combination of fearless and reckless, which both excited and terrified us. As the sun rose, we parted ways but our curiosity was sparked and we made plans to return and start filming. We were drawn back to Texas for the excitement and freedom we felt that night, and we wanted to capture their raw American teenage experience. We quickly formed a bond with the girls, and kept going back. Despite being years apart and from very different places, we became fast friends, and they were just as excited to show us what it was like to be them as we were to learn. We spent hours on bedroom floors, chatting late into the night, going to bonfire parties and 1am McDonalds runs. As we spent more time filming, we were struck by how casually and often the kids, girls and boys alike, talked about things like sexual assault and rape. They were all matter of fact about it, as if it were an inherent, unavoidable part of growing up. We noticed that the girls were continually harassed by their guy friends, and shrugged off their own experiences with assault by blaming themselves, or claiming it wasn’t a big deal. When we asked about it, we learned that almost every single girl we met has had some kind of non-consensual sexual experience, and we started noticing the ways it changed them. They taught us their methods of survival: never go to a party alone, always have a ride, never be in a room by yourself with a guy—and if you are, you have to be ready to say no. We started to understand that the fun and wild freedom of these teenage years are also laced with toxic and pervasive social norms. – Parker Hill and Isabel Bethencourt

“Echoing Bing Liu’s Minding the Gap, Bethencourt and Hill beautifully capture the gruelling nature of adolescence, in particular the heart-wrenching experience of growing up as a woman in the United States.” – Rafaela Sales Ross, One Room With A View

“Heartbreaking and sensitive in equal measure, a film that centers people who often fade into the background of our culture.” – Brian Tallerico, RogerEbert.com

“Cusp is a little staggering and incredibly beautiful… It’s to Cusp’s credit that there’s still a sense of magic and possibility throughout the film, as if the girls have some hope for their futures.” – Alissa Wilkinson, Vox

“A portrait of modern girlhood, this documentary ultimately becomes a bleak look at the normalization of sexual abuse among the very victimized young women.” – Beatrice Loayza, New York Times