Based on the critically acclaimed graphic novel, DAYS OF THE BAGNOLD 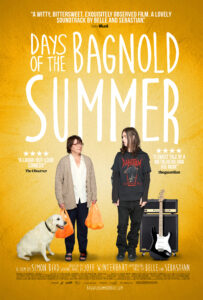 SUMMER is a funny yet sweet coming-of-age story about single motherhood and Metallica.

Daniel (Earl Cave) was supposed to spend the summer with his dad and his dad’s new wife in Florida, but when his dad cancels the trip Daniel and his mom, Sue, (Monica Dolan) suddenly face the prospect of six long weeks together. An epic war of wills ensues in their suburban home as Daniel just wants to listen to heavy metal and start a band while his mom hopes to rekindle the fun times

they used to have together. Featuring original songs by Belle and Sebastian. Director Simon Bird joins us for a conversation on his beautifully rendered tale of a sullen, insecure teen and his effervescent single mom doing her best to keep moving forward in a world that is pelting her with cheap shots and exasperating insults.

For news and updates go to: days-of-the-bagnold-summer

About the filmmaker – Director Simon Bird’s first short film, Ernestine and Kit, premiered at South By Southwest, and was nominated for Best Short at the Irish Film and Television Awards. Previously, Simon has worked as a stand-up comedian, writer, producer, and actor. As a writer, he created The King Is Dead for the BBC and co-created Chickens for Sky, which was nominated for Best Sitcom at the Broadcast Awards. As a producer, he set up Guilty Party Pictures, a TV and film production company backed by RED and Studiocanal. Guilty Party has produced content for Channel 4, Sky and the BBC, and recently wrapped on How Europe Stole My Mum, an original TV show for Channel 4, to air later this year.  As an actor, Simon has starred in five series of Rose D’Or-winning sitcom Friday Night Dinner. The sixth series shoots later this year. He is perhaps best known as Will McKenzie from Channel 4’s BAFTA-winning sitcom THE INBETWEENERS, THE INBETWEENERS MOVIE, which is the highest-grossing comedy film ever in the UK, and THE INBETWEENERS 2, which had the highest-grossing opening weekend of any film in the UK in 2014. Simon has won multiple British Comedy Awards and been nominated for a BAFTA and Royal Television Society award for acting.

“Bird and writer Lisa Owens manage not only to mine repeated laughs from their basic gag – metal mayhem in Hornchurch Drive – but to do so sweetly rather than tweely.” – Danny Leigh, Financial Times

“An unexpectedly gentle and pensive portrait of a strained relationship between a mother and a son.” – Wendy Ide, Screen International

“Far closer in spirit to the lighter works of Mike Leigh than the broader material that made him a well known figure in British comedy, Bird’s debut is innately humanistic, with cross-generational appeal.” – Alistair Ryder, Film Inquiry