DEADLY ILLUSIONS is a psychological thriller about a bestselling female novelist 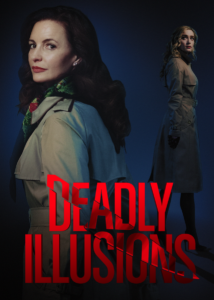 Mary Morrison (Kristin Davis), suffering from writer’s block, hires an innocent yet beautiful caregiver Grace (Greer Grammer) to watch over her children as she dangerously indulges into the fantasies of her new best seller. Everything changes when Mary becomes spellbound by Grace who soon becomes her muse. As their relationship blossoms, the line between the life she’s writing and the one she’s

living becomes blurred. Director and writer Anna Elizabeth James (Emma’s Chance, Destined to Ride) joins us to talk about the themes running through her latest film of female sexuality and sexual fluidity, identity and the personal satisfaction of working with a top notch cast of actors.

For news and updates go to: kissandtaleproductions.com

About the filmmaker – Anna Elizabeth James is a director, writer, and producer who first caught the filmmaking bug after being given the opportunity to create her own TV show in junior high school. Anna’s fourth feature film, Deadly Illusions, was completed under her company banner Kiss and Tale Productions – where she wrote, directed, and produced. The film stars Kristin Davis, Dermot Mulroney, Greer Grammer and Shanola Hampton. Anna directed her fourth feature film this past winter, Sinister Sorority. (2021). Anna Elizabeth James made her break into the feature world by writing and directing, Emma’s Chance, starring Greer Grammer and Missi Pyle. Most recently it has been added to the Hallmark Movie Collection. Anna’s second feature, Destined to Ride, starred Madeline Carroll and Denise Richards. Anna has directed numerous short films, including a teen pilot, Diary of a Teenage Nobody, which was optioned by MTV. Her psychological thriller, Zone 2, toured through the Etheria Film Festival, winning an audience award. Known as a pioneer in the industry for her iPhone filmmaking and distribution methods, Anna has been featured in WIRED Magazine, The New York Times, USA Today, and has spoken at TEDx, New York Apple Store, DGA, and The Academy of Television, Arts and Sciences showcasing these forward thinking films. Anna holds an MFA from USC’s School of Cinematic Arts and is the mother of four. She currently resides in South Jordan, Utah with her two assistant pups, Pepper and Teddy, who sit by her side as she writes. annaelizabethjames.com