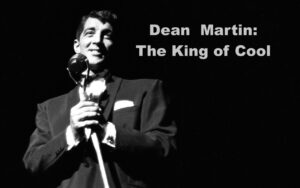 Dean Martin epitomized cool. A founding member of the Rat Pack, Dean was a multi-talented performer who was part of the number one comedy act in America, a chart-topping singer for over half a century and one of the biggest stars in Hollywood and on TV. He was the consummate charmer on stage and off. Everybody loved him. Yet for all his celebrity, fame and adoration, no one ever truly knew him. King of Cool seeks to change this. Through the use of interviews with friends, family, those who

worked with him and modern actors and musicians inspired by him, as well as never before seen archival footage including from his time with Jerry Lewis, his

Regis Philbin, Bob Newhart, Barry Levinson, Carol Burnett, James Woods. Director Tom Donahue joins us for a conversation about one of the most accomplished entertainers to ever grace a film set, television sound stage, recording studio or nightclub, and how he brought Dean back to life through the stories told by the family and friends who knew him best.

For news and updates go to: creativechaosvmg.com/work

“Caused me to rethink my own perspective on an actor and his roles.” – Peter Martin, ScreenAnarchy

“What’s truly extraordinary about this documentary is the sheer number of people who were interviewed. Half the fun is seeing so many familiar faces…” – Raquel Stecher, Out of the Past