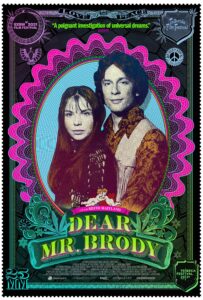 21-year-old heir to a margarine fortune, announcing to the world that he would personally usher in a new era of peace and love by giving away his $25-million inheritance to anyone in need. In a frenzied few weeks, Brody and his young wife, Renee,

ignited a psychedelic spiral of events. Instant celebrities, the Brody’s were mobbed by the public, scrutinized by the press, and overwhelmed by the crush of personal letters responding to this extraordinary offer. Fifty years later, an enormous cache of these letters 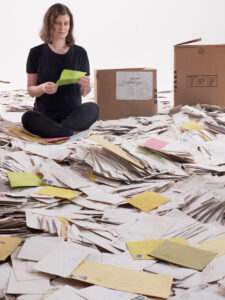 are discovered—unopened. In this riveting follow-up to his acclaimed TOWER, award-winning director Keith Maitland reveals the incredible story of Michael Brody Jr.— and the

countless struggling Americans who sought his help—to create a deeply moving meditation on desire, need, philanthropy, and love. Director Keith Maitland (Tower, A Song for You: The Austin City Limits Story) join’s for a conversation on this extraordinary starburst of a  “happening” that revealed the pain and struggle of ordinary people who saw the Mr. Brody as hope.

To find out more go to: greenwichentertainment.com/film/dear-mr-brody

About the filmmaker – Keith Maitland follows up the Emmy-winning TOWER with a psychedelic look at money, desire—and ultimately, love—with his fourth nonfiction feature, Dear Mr. Brody. producer and screenwriter, Maitland lives in Austin, TX with his wife (producer / cinematographer) Sarah Wilson, and their 6-year-old production-assistant/son, Theo. On the heels of TOWER, an animated school-shooting documentary, Variety named Maitland one of “10 Documakers to Watch.” In 2016-2017, TOWER won multiple festival awards, received PGA, Gotham, and Peabody nominations and won the first-ever Critic’s Choice Award for Most Innovative Documentary, as well as the Emmy for Best Historical Documentary. Maitland began his career on the streets of New York, working on the fiction side of the industry as a DGA Trainee and Assistant Director. After 7-seasons with NBC’s Law & Order, and work on a variety of features, Maitland was inspired by his documentary- photographer wife, Sarah Wilson, to try his hand at non-fiction storytelling. Wilson is the cinematographer of both TOWER and Dear Mr. Brody. She serves as a Producer on DEAR MR. BRODY as well. Together they own Go-Valley, a production compound in East Austin.  In addition to developing new documentaries, Maitland works as a screenwriter (partnered with New York Times reporter Matt Apuzzo) and he’s currently attached to direct Nobody’s Money, a fictionalized adaptation of one of Apuzzo’s articles. To find out more about Keith’s work go to: go-valley.com

“Incredibly powerful…The intentions of this documentary are gorgeous, and its belief in Americans, past, present, and future is a force to be reckoned with.” – Nick Allen, Roger Ebert.com