According to one of many Haitian beliefs, we are born from water and so to water our souls return… but only for a year and a day, after our demise.  Guetty Felin’s AYITI 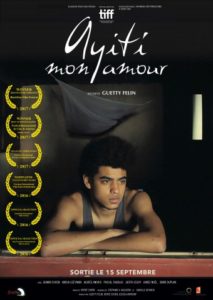 MON AMOUR is set in a land inhabited by spirits looking for their final resting place, mourners seeking closure and ordinary individuals engaged in a precarious dance of survival. It spins the magic neo-realist  tale of Orphée an awkward teen grieving the loss of his father. One day after a freak encounter with an underwater sea creature he develops special electrifying powers, but with power comes certain responsibilities…The world seems to be changing much too rapidly for Jaurès the old fisherman. These days Jaurès is obsessed with the environmental degradation, the rising temperature of the sea and the drought that is starving his cows. But what pre-occupies Jaurès

the most is his beloved wife Odessa who is bedridden and homesick. Jaurès is determined to do everything to make her well again even if it means putting his own life in peril…Lastly, there’s the beautiful mysterious Ama, part muse, part wandering soul but also the main character of a novel by an uninspired writer. After five years of waiting for him to complete his masterpiece, she decides to leave him and his story, and sets out to live her own life. With AYITI MON AMOUR the island nation of Haiti has its first ever entry in the Academy Awards category of Best Foreign Language Film. It is also  the first narrative feature entirely shot in Haiti by a Haitian-born female director, Guetty Felin. She joins us to talk about her warm-hearted, humane film and its celebration of her native country.

For the latest news go to: facebook.com/AyitiMonAmourMovie or belle moon productions