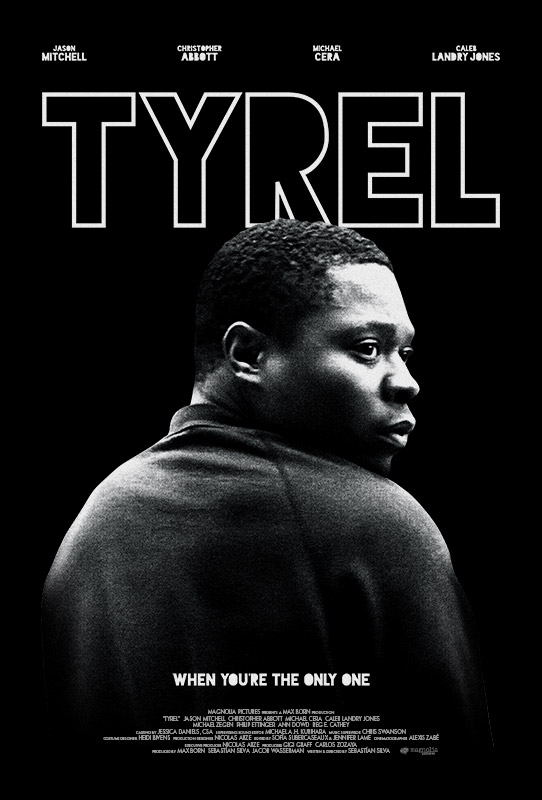 a back road high on a cold, snowy day in the Catskills Mountains. Tyler and John are on their way to a weekend getaway to celebrate the birthday of Pete (Michael Cera), one of John’s old friends, at a cabin in the woods. Tyler needs the excursion, even though he will be among mostly strangers, because the home he shares with his Puerto Rican girlfriend is packed with her visiting family – and the ailing, elderly mother to whom she is devoted. What could be better than a jocular, beer-soaked weekend in the country with a bunch of his buddy’s friends? Well, nothing … except that an

empty gas tank is only the first in a series of discomforting moments Tyler encounters and engenders over the next 48 hours. Writer/director Sebastián Silva’s deploys his signature handheld style probing subtext and body language, TYREL conjures an undeniable underlying tension and it marks his most radical character exploration yet—a timely, provocative, and brilliant observation of the idea of otherness in today’s American climate. Director Sebastián Silva (The Maid, Nasty Baby, Crystal Fairy) joins is for a lively conversation on male bonding, tribalism, race, working with this outstanding cast of actors and undermining expectations.

For news and updates go to: tyrelmovie.com

“Silva’s most political work yet–though it is sly and subtle, the intention is palpable, the emotions elicited all too real, and ultimately, “Tyrel” proves to be a fascinating entry in his body of work.” – Katie Walsh, Tribune News Service

“This is a fast and lean film, an absolute workout for its outstanding cast and a devilish roller coaster ride for audiences.” – Jordan Hoffman, Vanity Fair

“Every time this fly-in-the-buttermilk scenario leans toward satire, it reminds you that you’re really watching a horror movie.” – David Fear, Rolling Stone Magazine